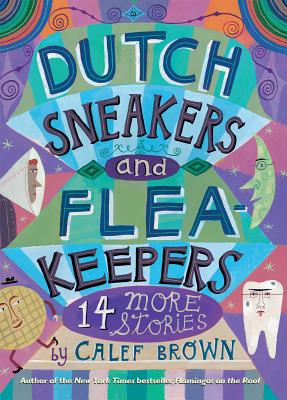 By Calef Brown
$6.99
Hard to Find - May no longer be available

Though not as creative or spontaneous as his first collection, POLKABATS AND OCTOPUS SLACKS, Calef Brown's newest will appeal to those who loved his first book. Same zany illustrations, same silly fun - Brown goes a long way in filling a gap left by the death of Shel Silverstein.

In the tradition of Edward Lear, Calef Brown has fashioned fourteen nonsense poems so wacky that both young and old will be unable to suppress their laughter. Invented words and sounds and their visual counterparts create both an audible and a visual feast. This is the kind of silliness children (and many adults) relish.

Calef Brown began his career as a tour guide at an early age, when he discovered the simple joy of pointing things out. He is also an artist, writer, and frequently a blue elephant. Mr. Brown’s illustrations have appeared in many magazines and newspapers, and his paintings have been exhibited in N.Y., L.A., S.F., and other places without fancy initials, like Osaka and Rome. He lives in Maine.