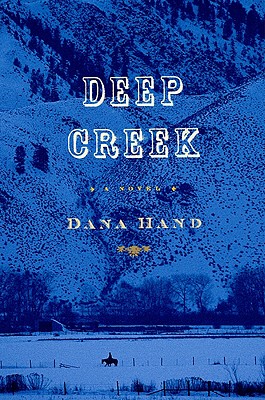 An engrossing adventure novel based on the true account of the 1887 massacre of thirty Chinese gold miners in Idaho. Written with great insight into the mindless racial prejudice that infiltrated every pore of society. A splendid read! — Louise Jones

Idaho Territory, June 1887. A small-town judge takes his young daughter fishing, and she catches a man. Another body surfaces, then another. The final toll: over 30 Chinese gold miners brutally murdered. Their San Francisco employer hires Idaho lawman Joe Vincent to solve the case. Soon he journeys up the wild Snake River with Lee Loi, an ambitious young company investigator, and Grace Sundown, a métis mountain guide with too many secrets. As they track the killers across the Pacific Northwest, through haunted canyons and city streets, each must put aside lies and old grievances to survive a quest that will change them forever. Deep Creek is a historical thriller inspired by actual events and people: the 1887 massacre of Chinese miners in remote and beautiful Hells Canyon, the middle-aged judge who went after their slayers, and the sham race-murder trial that followed. This American tragedy was long suppressed and the victims nearly forgotten; Deep Creek teams history and imagination to illuminate how and why, in a seamless, fast-moving tale of courage and redemption, loss and love. A dazzling new novel for fans of Leif Enger, Lisa See, and Ivan Doig.

Dana Hand is the pen name of Will Howarth and Anne Matthews, who live and work in Princeton, New Jersey. Under their own names, they have published eighteen nonfiction books on American history, literature, and public issues.

"The roundup of serious writers who have written Westerns [since 1966 includes], this year, Deep Creek by Dana Hand (pen name of Anne Matthews and Will Howarth), a grim and fascinating fictional account of the actual slaughter of Chinese miners in 1870s Idaho."--Allen Barra, The Daily Beast."[An] engrossing look at racial prejudice and the settling of the West…an insightful look at how Chinese immigrants and American Indians became the targets of rage & violence." --Publishers Weekly  "Dana Hand’s debut novel, a powerful and thorough indictment of the racial discrimination rampant in the late 19th century, takes its name from a site on the Snake River where over thirty Chinese gold miners were slaughtered...The Snake River Country is depicted as magnificent yet brutal, in both appearance and temperament, and the spare, visceral prose brilliantly evokes its harsh nature. Likewise, the characters, among the most courageous and original to be found in Western fiction, don’t reveal their secrets until they’re good and ready."—Sarah Johnson, editor, Historical Novels Review "Dramatically, even lyrically...the authors elegantly weave an engaging, thrilling, lively narrative of how and why the gang murdered and mutilated... effortlessly wrapped in a backdrop of the growing Wild West, with self-serving land deals, nefarious connections between powerful men and the rustlers, the precariousness of frontier justice, and pervasive racism against the Chinese. A splendid read.—William Wong, San Francisco Chronicle "Astonishingly effective...a gripping, spooky historical novel, based on true events, told in a way that closely resembles real life, [yet] full of the unknown and unknowable...Joe, Lee Loi and Grace form a de facto family and help some appealing children along the way. They create another, entirely credible world, which is what America used to be all about. Deep Creek is highly ambitious and compelling, much more complex that it might appear from paraphrase. The dual authorship of this novel may have something to do with the fact that it's twice as good as it might have been otherwise."—Carolyn See, Washington Post "... for those who love stories about well-developed characters, Deep Creek provides a host of them. Joe himself is a refreshingly offbeat Western hero: stalwart and resourceful, yes, but also thoughtful and willing to ask questions first and shoot later. Lee Loi also proves a bundle of compelling contradictions, but for me the book’s “Most Memorable Character” award goes to Grace Sundown ... a virtual embodiment of the multiple influences that make up the West — and, by extension, all of the United States. To say nothing of her smarts, daring, sly sense of humor, cussed independence and indomitable sense of self. She’s definitely one to ride the river with—even a river as treacherous and haunting as the Snake River that flows, like a bloodline, through Deep Creek.”—Carol Cling, Las Vegas Review-Journal