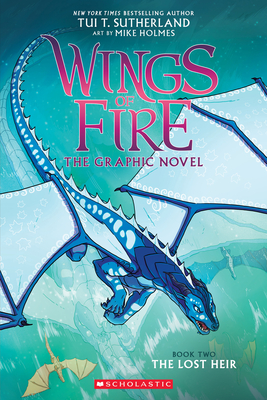 This is book number 2 in the Wings of Fire Graphic Novel series.

The New York Times bestselling Wings of Fire series soars to new heights in this graphic novel adaptation!
The lost heir to the SeaWing throne is going home at last.

She can't believe it's finally happening. Tsunami and her fellow dragonets of destiny are journeying under the water to the great SeaWing Kingdom. Stolen as an egg from the royal hatchery, Tsunami is eager to meet her future subjects and reunite with her mother, Queen Coral.

But Tsunami's triumphant return doesn't go quite the way she'd imagined. Queen Coral welcomes her with open wings, but a mysterious assassin has been killing off the queen's heirs for years, and Tsunami may be the next target. The dragonets came to the SeaWings for protection, but this ocean hides secrets, betrayal -- and perhaps even death.

The New York Times bestselling Wings of Fire series takes flight in this first graphic novel edition, adapted by the author with art by Mike Holmes.

Mike Holmes has drawn for the comics series Bravest Warriors and Adventure Time and is the creator of the art project Mikenesses. His books include Secret Coders (written by Gene Luen Yang), Animal Crackers: Circus Mayhem (written by Scott Christian Sava), and the True Story collection. He and his wife, Meredith, live in Philadelphia with their son, Oscar, Heidi the dog, and Ella the cat.

Praise for The Dragonet Prophecy (Wings of Fire: The Graphic Novel: Book One)

"Fans of the series will be drawn to this visual representation of their favorite characters, as will those who enjoy epic, animal-based fantasies." -- School Library Journal


Praise for The Lost Heir (Wings of Fire, Book 2):

"[A] perfect adventure for young fantasy fans to sink their teeth into." -- School Library Journal


Praise for The Dragonet Prophecy (Wings of Fire, Book 1):

"Dramatic battle scenes, double-crosses, and one seriously deranged queen makes Wings of Fire a series that should have broad appeal for middle-grade fantasy fans." -- Booklist

"Fast-paced and detailed, this first installment in a new adventure series is entertaining." -- Kirkus Reviews

"Readers of all ages will be enchanted by the humanistic storyline and the page-turning excitement." -- Library Media Connection