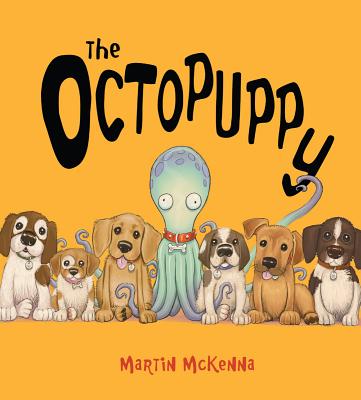 Most kids want a pet. Usually a dog or a cat. And Edgar is no exception with wanting a dog. Instead, he gets Jarvis, an Octopuppy. He cannot play dead, or lay down like normal dogs. No, Jarvis has to always go overboard. But Edgar still tries to take Jarvis to the dog show. But when Jarvis being Jarvis makes Edgar say something, Jarvis runs away. But soon, Edgar learns a very important lesson. The Octopuppy was a fun book to read. Martin McKenna's quirky text and readable illustrations make this a fun anytime adventure. — Jeanette

Cartoony silliness captures an all-too-familiar childhood dilemma--you want one thing but get another. In "Octopuppy", McKenna's Jarvis (the eclectic octopus) is the very epitome of this NOT THE PUPPY I WANTED phenomenon. Well-placed microexpressions balance Jarvis' wild eccentricities to create one of the weirdest, best-composed picture books of the year. — Aubrey Restifo

Can the OCTOPUPPY be the perfect pet?

Edgar wanted a dog. Instead, he got an octopus named Jarvis.

Jarvis is brilliant and does his best to act like the dog Edgar wants, but nothing he does is good enough to please Edgar. Ultimately, Edgar recognizes that while Jarvis might not be the dog he wanted, he is special in his own endearing way.

Young readers will love the funny, imaginative illustrations that are paired with a relatable lesson of appreciating the greatness of what we have in front of us.

Martin McKenna is a freelance illustrator based in the U.K. This is his first picture book in the U.S. For more information, go to www.theoctopuppy.com.