Why We Took the Car (Hardcover) 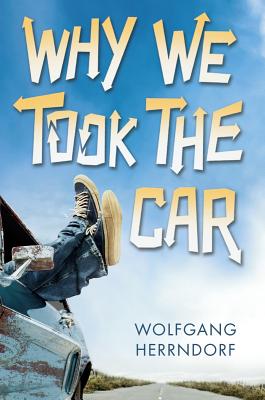 Mike and Tschick are misfits, permanent residents of Loserville. When Tschick “borrows” a car at the start of summer vacation, Mike reluctantly goes along for the ride. Hilarious and touching. Think of it as a driver’s manual for friendship, loyalty, and finding your own way. — Jennifer Armstrong

Mike Klingenberg doesn't get why people think he's boring. Sure, he doesn't have many friends. (Okay, zero friends.) And everyone laughs at him when he reads his essays out loud in class. And he's never invited to parties - including the gorgeous Tatiana's party of the year.

Andre Tschichatschow, aka Tschick (not even the teachers can pronounce his name), is new in school, and a whole different kind of unpopular. He always looks like he's just been in a fight, his clothes are tragic, and he never talks to anyone.

But one day Tschick shows up at Mike's house out of the blue. Turns out he wasn't invited to Tatiana's party either, and he's ready to do something about it. Forget the popular kids: Together, Mike and Tschick are heading out on a road trip. No parents, no map, no destination. Will they get hopelessly lost in the middle of nowhere? Probably. Will they meet crazy people and get into serious trouble? Definitely. But will they ever be called boring again?

Wolfgang Herrndorf (1965-2013) was born in Hamburg, Germany, and studied painting before turning to writing later in his career. He wrote several award-winning novels for adults, and WHY WE TOOK THE CAR was the receipient of the German Youth Literature Award.

Mike Klingenberg has just finished another boring, socially awkward year in middle school and is staring down a solitary two-week stint at home, thanks to his mother’s latest round of rehab and his father’s “business trip” with a suspiciously attractive personal assistant. Just as he’s watering the lawn, imagining himself lord of a very small manor in suburban Berlin, class reject Tschick shows up in a “borrowed” old Soviet-era car, and the boys hatch a plan to hit the road. Mike’s rich interior life—he meditates on beauty and the meaning of life and spins self-mocking fantasies of himself as a great essayist—hasn’t translated well to the flirtatious physical swagger required by 8th grade. Tschick, meanwhile, is a badly dressed Russian immigrant who often shows up to school reeking of alcohol and who is also given to profound leaps of psychological insight. Their road trip (destination: Wallachia, a German euphemism for “the middle of nowhere”; also a region of Romania) is peopled by unexpected, often bizarre, largely benign characters who deepen Mike’s appreciation for humanity and life. Each episode in the boys’ journey grows more outrageous, leading readers to wonder how far they’ll go before coming to a literal screeching (and squealing) halt.

In his first novel translated into English, Herrndorf sits squarely and triumphantly at the intersection of literary tall tale and coming-of-age picaresque.

Publishers Weekly Starred Review
German novelist Herrndorf makes his YA (and U.S.) debut with this action- and emotion-packed story of surprise summer adventure. When German eighth-grader Mike Klingenberg discovers that he’s among the few “Boring kids and losers... Russians, Nazis and idiots” who are not invited to his crush Tatiana’s birthday party, he is devastated. Mike is facing a miserable summer, with his mother in rehab and father away at a “business meeting” with his sexy assistant, when his new Russian classmate, Tschick (whom Mike considers “trash”), arrives at his house in a stolen car. An unlikely compatibility leads to a candy-fueled road trip, complicated by their lack of a map or cell phone. Driving all over Germany, the boys face conundrums like avoiding the police, buying gas and food when clearly underage, and vaguely seeking Tschick’s grandfather. Prepared by life to expect ill will, Mike and Tschick instead meet “almost only people from the one percent who weren’t bad.” Beginning at the end, with Mike narrating the explanation suggested by the title, this alternately wild, sad, hilarious, and tender tale chronicles the development of a strange and beautiful friendship.


A Kirkus Best Book of the Year