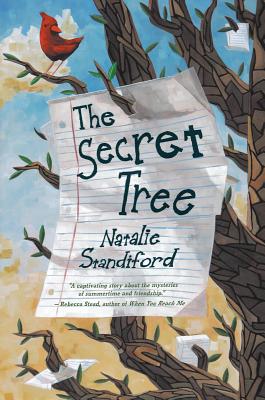 By Natalie Standiford
$16.99
Hard to Find - May no longer be available

Minty plans to spend the summer hanging out on the block and practicing roller derby moves. But when she discovers a tree full of secrets, she sets out to solve the neighborhood’s many mysteries. A cute and quirky summer mystery! — Marika McCoola

“Minty Mortimer loves being a kid. She loves roller derby, hanging out, and annoying her older sister, Thea. Minty's best friend, Paz, is ready to embrace middle school and a new grown-up image. She wants to impress the cool seventh graders, and she is becoming cruel to Minty. The Secret Tree tells the story of Minty's last summer as a little kid and Paz's first summer as a big kid. Unfortunately for their friendship, it's the same summer. Every fifth grader needs to read this book. So much heartbreak could be avoided if kids could only see the secrets in their friends' hearts.”
— Elizabeth Anker, Alamosa Books, Albuquerque, NM

A sweet story of a tree that's literally filled with secrets.
What is your secret?
Minty's neighborhood is full of mysteries. There's the Witch House, a spooky old farmhouse on the other side of woods from where Minty and her best friend, Paz, live. There's the Man Bat, a seven-foot-tall half man, half bat who is rumored to fly through the woods. And there are the Mean Boys, David and Troy, who torment Minty for no reason, and her boy-crazy older sister, Thea, who acts weirder and weirder.
One day Minty spots a flash in the woods, and when she chases after it, she discovers a new mystery--a Secret Tree, with a hollow trunk that holds the secrets of everyone in the neighborhood. Secrets like:
I put a curse on my enemy. And it's working.
I'm betraying my best friend in a terrible way.
No one loves me except my goldfish.

Natalie Standiford is the author of HOW TO SAY GOODBYE IN ROBOT, CONFESSIONS OF THE SULLIVAN SISTERS, and THE SECRET TREE. She is originally from Maryland, but now lives in New York City and plays in the all-YA-author band Tiger Beat.

Praise for How to Say Goodbye in Robot:

* "Bea's original first-person voice will draw readers in, and the unexpected plot will keep them engaged. A decidedly purposeful not-love story, this has all the makings of a cult hit with a flavor similar to Stephen Chbosky's The Perks of Being a Wallflower." - Kirkus Reviews, starred review

* "An honest and complex depiction of a meaningful platonic friendship and doesn't gloss over troubling issues....Teens will identify with the intense emotions of Beatrice and Jonas, the reasons they are drawn to each other, and the ups and downs of their relationship...Outstanding" - SLJ, starred review

"The heart of this novel is neither cold and metallic nor full of romance and delusion. Instead, it’s very human." - Booklist

Praise for Confessions of the Sullivan Sisters:

* "Readers will eagerly flip pages to hear the sins of the Sullivan sisters and love the tale each one spins. This book has a long shelf life ahead of it...Excellent" - SLJ, starred review

"Standiford makes reading about Baltimore high society and the flawed, pampered, but likable Sullivans feel like a wickedly guilty pleasure....Readers will wish that more family members had confessions to make." - PW

"Humor abounds in the inner workings of this interesting and unusual family." - Kirkus Reviews