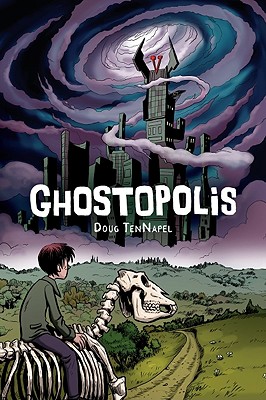 Grant finds himself accidentally sent to the world of ghosts. He and his new friends (one of whom, is the guy who sent him to Ghostopolis) must find a way to stop the evil leader of the city and get Grant home. This motley crew will meet goblins, Bone Kings, Mummies, really big bug-minions and much more. A superhero ending, images and story plots that can remind you of a multitude of different science fiction staples all come together to make a fun and cozy read. The illustrations perfectly illustrate The Real and The Supernatural worlds. The colors are bold, rich and the perfect compliment to the text. — Jeanette

A page-turning adventure of a boy's journey to the land of ghosts and back.
Imagine Garth Hale's surprise when he's accidentally zapped to the spirit world by Frank Gallows, a washed-out ghost wrangler. Suddenly Garth finds he has powers the ghosts don't have, and he's stuck in a world run by the evil ruler of Ghostopolis, who would use Garth's newfound abilities to rule the ghostly kingdom. When Garth meets Cecil, his grandfather's ghost, the two search for a way to get Garth back home, and nearly lose hope until Frank Gallows shows up to fix his mistake.

Doug TenNapel was raised in the town of Denair, California. In 1994, he created the popular Earthworm Jim. Doug's graphic novel GHOSTOPOLIS was a 2011 ALA Top Ten Great Graphic Novel for Teens, and his follow-up, BAD ISLAND, was a 2012 ALA Great Graphic Novels for Teens as well as one of School Library Journal's Top 10 Graphic Novels of 2011. Doug lives in Franklin, Tennessee.