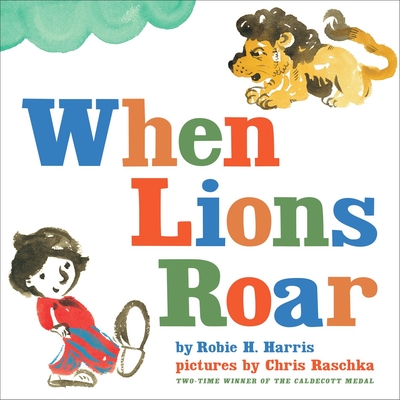 Sometimes sounds can be overwhelming, building until it is all too much. But the young protagonist in When Lions Roar knows what to do when this happens. This simple book delivers emotions with bold yet simple clarity. — Marika McCoola

WHEN LIONS ROAR is a caring and reassuring story of a young child who faces his fear and makes his world a safe place again.

Thunder is booming!
A big dog is barking!

Sometimes the world seems scary--too scary. But what if you shout, "GO AWAY!" Will the sun come out? Will a flower bloom?

Robie H. Harris is an award-winning author of over thirty books for everyone from toddlers to older kids, including MAYBE A BEAR ATE IT!, MAIL HARRY TO THE MOON!, WHO HAS WHAT?, DON'T FORGET TO COME BACK!, and GOODBYE MOUSIE. She lives in New York City. Visit her online at www.robieharris.com.

Chris Raschka is the Caldecott Award-winning illustrator of A BALL FOR DAISY and THE HELLO, GOODBYE WINDOW. He is also the illustrator of YO! YES? (which won a Caldecott Honor), SOURPUSS AND SWEETIE PIE, CHARLIE PARKER PLAYED BE BOP, and FARMY FARM. He lives with his wife and son in New York City.

Praise for Robie Harris and Chris Raschka
Chris Raschka has won the Caldecott Medal for A BALL FOR DAISY and THE HELLO, GOODBYE WINDOW. He won a Caldecott Honor for YO! YES?

MAYBE A BEAR ATE IT! (written by Robie Harris and illustrated by Michael Emberley)
"Even adults will be hard pressed not to smile." -- BOOKLIST

FARMY FARM (by Chris Raschka)
"Is there any children's book format Raschka, who also has his first middle-grade novel coming out this year, can't master?" -- THE NEW YORK TIMES

CHARLIE PARKER PLAYED BE BOP (by Chris Raschka)
"Like a good bass player, his words set the rhythm, and like a saxophone solo, his pictures deliver the surprise and the humor." -- BOOKLIST

Publisher's Weekly Starred Review
Expertly attuned to everyday situations that frighten children, this concise book depicts an escalation of noises, followed by a period of decompression and calm resolution. On a family’s zoo outing, a boy covers his ears, “When lions roar! When monkeys screech!” Walking next to his mother, whose blue umbrella surrounds her head like a halo of melancholy, the boy shrinks from a thunderstorm, siren, and barking dog. Most unsettling, the boy recoils, “When daddies yell! When mommies holler!” The boy quivers at the sensation that “The scary is near!” He crouches, closes his eyes, and says, “Scary! Go away!” Harris (Who Has What?) presents anxiety and its aftermath in compact sentences, and Caldecott Medalist Raschka (A Ball for Daisy) pictures the boy gradually unfolding and re-engaging with a sunnier world where “A flower blooms. An ant crawls by.... A mommy sings... A daddy dances.” Sensitive children (and temperamental adults) will recognize themselves in this portrait of a boy taking a break from overwhelming stimuli. Harris and Raschka present practical strategies for stepping back from “the scary.”