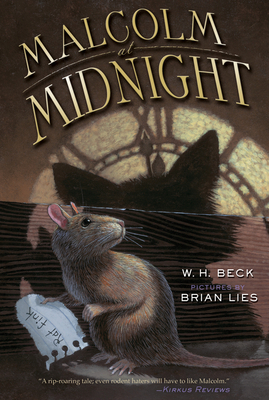 Malcolm is often mistaken for a mouse, but is a rat. However, just because he is physically a rat does that mean he has to act like a rat? Or worse, a rat fink? When Malcolm (formerly a pet-shop rat and now a 5th grade pet at a local elementary school) is accused of being just that, can he solve the many mysteries that seem to keep happening? Can Malcolm clear his name, make friends with not only the other school pets (who keep their beloved school safe after the lankies (adults) and nutters (children) leave) but the nutters of his classroom (even though that is strictly forbidden)? A fantastic mix of fantasy, mystery and even a little romance! The twists and turns in are as many as the corridors of Malcolm’s new home! Fun illustrations by Brian Lies add to the adventure. — Jeanette

When Malcolm the rat arrives as the pet at McKenna School, he revels in the attention. He also meets the Midnight Academy, a secret society of classroom pets that keeps the nutters (kids) safe. There’s just one problem: Rats have a terrible reputation! So when the Academy’s iguana leader is kidnapped, Malcolm must prove his innocence—and show that even rats can be good guys. Illustrated by Brian Lies of Bats at the Beach, this engaging middle grade novel will have readers rooting for Malcolm as they try to solve the mystery alongside him.

W.H. BECK is both an author of children's books and a librarian. She grew up in Wisconsin, the oldest of four. As a kid, her dad always teased that she would be a librarian someday. She read all the time—walking home from school, while brushing her teeth, under the table at dinnertime, and under the covers at night. And, sure enough, after earning an elementary teaching degree from the University of Wisconsin, she went on to get a master’s degree in information studies from the University of Wisconsin-Milwaukee. She still lives and reads in Wisconsin and shares a home and books with her husband, two sons, and a big black dog. Visit her website at www.whbeck.com.

Brian Lies is the Caldecott honor-winning author-illustrator of New York Times bestsellers Bats at the Beach, Bats at the Library, Bats at the Ballgame, and Bats in the Band. He has written and illustrated more than twenty books for children. Born in Princeton, New Jersey, Brian lives on the South Shore of Massachusetts with his family.
www.BrianLies.com

"A rip-roaring tale; even rodent haters will have to like Malcolm."—Kirkus

"Escapades, humor, and romance weave together in this madcap elementary school adventure . . . A first-rate debut."—Publishers Weekly

"This creature-feature leavens spookiness with healthy doses of whimsy."—Booklist

"Malcolm is thoroughly likable . . . a good choice for younger students who are reading above grade level yet aren't quite ready for heavier emotional or thematic content."—School Library Journal