The Name Of The Rose (Paperback) 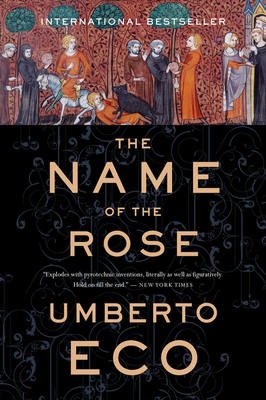 A cryptic, highly literary murder mystery set in an Italian monastery in the early 1300s. Narrated by a Benedictine novice tailing his master, an ingenious Franciscan friar sent on a mission of papal mediation, the duo become the de facto sleuths in solving a series of murders which seem to mirror the signifying events corresponding with the apocalyptic Seven Trumpets in the Book of Revelations. Inspired by Arthur Conan Doyle and Jorge Luis Borges alike, this tale of secrets and intrigue features religious and political controversy, forbidden manuscripts, and a dangerous, labyrinthine library. — Joe Michon-Huneau

An international sensation and winner of the Premio Strega and the Prix Médicis Etranger awards, this enthralling medieval murder mystery "explodes with pyrotechnic inventions, literally as well as figuratively" (The New York Times)

The year is 1327. Benedictines in a wealthy Italian abbey are suspected of heresy, and Brother William of Baskerville arrives to investigate. When his delicate mission is suddenly overshadowed by seven bizarre deaths, Brother William turns detective. His tools are the logic of Aristotle, the theology of Aquinas, the empirical insights of Roger Bacon — all sharpened to a glistening edge by wry humor and a ferocious curiosity. He collects evidence, deciphers secret symbols and coded manuscripts, and digs into the eerie labyrinth of the abbey, where “the most interesting things happen at night.”

“Like the labyrinthine library at its heart, this brilliant novel has many cunning passages and secret chambers . . . Fascinating . . . ingenious . . . dazzling.” —Newsweek

UMBERTO ECO (1932–2016) was the author of numerous essay collections and seven novels, including The Name of the Rose,The Prague Cemetery, and Inventing the Enemy. He received Italy’s highest literary award, the Premio Strega, was named a Chevalier de la Légion d’Honneur by the French government, and was an honorary member of the American Academy of Arts and Letters.