The Last Dragonslayer: The Chronicles of Kazam, Book 1 (Paperback) 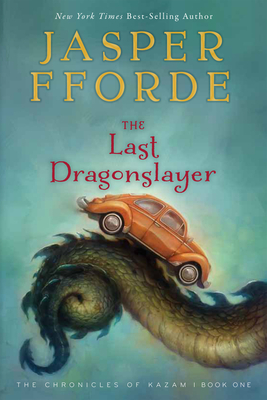 By Jasper Fforde
$7.99
Click Title for IN STOCK Location

This is book number 1 in the The Chronicles of Kazam series.

Jennifer Strange is fifteen and running one of the last Magic-for-Hire companies. Magicians who once had the ears of kings, the respect of the kingdom are now reduced to hiring out as “magical plumbers,” or worse, using their magic rugs to deliver take-out and transplant organs (and hopefully don’t get the two mixed up). But when Jennifer learns of the prophecy that predicts the death of the very last dragon she has no idea what she is now in for! Trying to deal with clients who won’t pay, truant officers and cranky witches who would sooner turn you into a newt than be nice to you are the least of her worries! Funny take on nature vs. man and the pains and tribulations of growing up. First in a new series. — Jeanette

In the good old days, magic was indispensable. But now magic is fading: Drain cleaner is cheaper than a spell, and magic carpets are used for pizza delivery. Fifteen-year-old Jennifer Strange runs Kazam, an employment agency for magicians—but it’s hard to stay in business when magic is drying up. And then the visions start, predicting the death of the world’s last dragon at the hands of an unnamed Dragonslayer. If the visions are true, everything will change for Kazam—and for Jennifer.

Jasper Fforde is the internationally best-selling author of the Chronicles of Kazam, the Thursday Next mysteries, and the Nursery Crime books. He lives in Wales.
www.jasperfforde.com
Twitter: @jasperfforde
Instagram: @jasperfforde

"Fforde's forady into children's books will delight readers who like their fantasy with a dash of silliness."--Publishers Weekly, starred review  "Fantasy readers with a taste for the silly should appreciate the subverted tropes."--Kirkus   "Thoroughly entertaining . . . readers will easily sit back and enjoy the fun."--Booklist

"Fforde's fantasy is smart, funny, and abundantly imaginative in its critique of commercial culture."--Horn Book