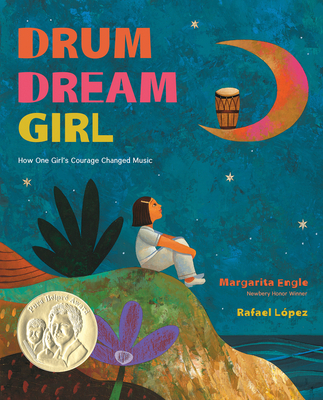 Girls cannot be drummers. Long ago on an island filled with music, no one questioned that rule—until the drum dream girl.

In her city of drumbeats, she dreamed of pounding tall congas and tapping small bongós. She had to keep quiet. She had to practice in secret. But when at last her dream-bright music was heard, everyone sang and danced and decided that both girls and boys should be free to drum and dream.

This beautiful picture book was recognized with a Pura Belpré Honor. A strong option for those interested in women's history and Hispanic History topics.

Margarita Engle is a Cuban-American poet and novelist whose work has been published in many countries. Her many acclaimed books include Silver People, The Lightning Dreamer, The Wild Book, and The Surrender Tree, a Newbery Honor Book. She is a several-time winner of the Pura Belpré and Américas awards, as well as other prestigious honors. She lives with her husband in Northern California. For more information, visit www.margaritaengle.com.

Rafael López grew up in Mexico City, where he was immersed in the rich cultural heritage and color of street life. He is the illustrator of many vibrant picture books, including the acclaimed Drum Dream Girl: How One Girl's Courage Changed Music by Margarita Engle and Maybe Something Beautiful: How Art Transformed a Neighborhood by F. Isabel Campoy and Theresa Howell. He has received the Pura Belpré and Américas awards multiple times. Rafael Lopez also designs and creates community-based murals nationwide. He divides his time between San Miguel de Allende, Mexico, and San Diego, California. Visit him at rafaellopez-books.com.

2017 Carnegie Medal winner   * "A beautiful account of a young girl's bravery and her important contribution toward gender equality in the creative arts." —Kirkus, starred review   * "The heroine’s tenacity in the face of naysayers will inspire all dreamers, and the illustrator’s smile-inducing cameo on the last page emphasizes the universality of Millo’s story...For those looking for more nonfiction titles about female musical powerhouses." —School Library Journal, starred review   "The text and illustrations work together beautifully here, creating a story that will imbue readers with inspiration and a yearning to make music of their own." —Booklist   "A valuable addition to the growing library of stories about strong Latina women." —Publishers Weekly   "With its emphasis on artistry and visual metaphor, this title bears a strong kinship with Yuyi Morales’ Viva Frida, but it also brings an accessibility that young viewers (and teachers) will appreciate." —Bulletin   "Engle’s poetic text takes its cues from Zaldarriaga’s chosen instrument, its rhythm at times steadily assured and at others loose and improvisational...[E]very spread is full of motion, with some of the illustrations requiring a ninety-degree turn, as if the book itself has got to dance." —Horn Book Magazine   "Engle's poetic narrative combined with Lopez's warmly ethereal folk-art illustrations to evoke a nighttime tropical dreamscape." —New York Times Book Review     —