The Enemy of My Enemy (A Clandestine Operations Novel) (CD-Audio) 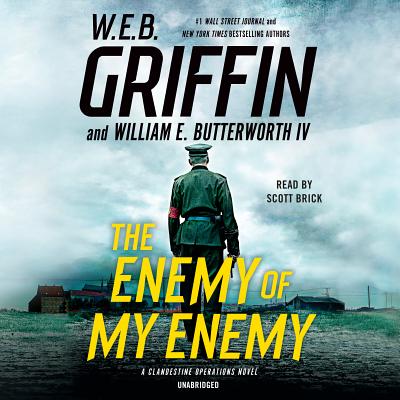 Special agent James Cronley Jr. finds that fighting both ex-Nazis and the Soviet NKGB can lead to strange bedfellows, in the dramatic new Clandestine Operations novel about the birth of the CIA and the Cold War.

A month ago, Cronley managed to capture two notorious Nazi war criminals, but not without leaving some dead bodies and outraged Austrian police in his wake. He's been lying low ever since, but that little vacation is about to end. Somebody--Odessa, the NKGB, the Hungarian Secret Police?--has broken the criminals out of jail, and he must track them down again.

Cronley is fast finding out that the phrase "the enemy of my enemy is my friend" can mean a lot of different things, and that it is not always clear which people he can trust and which are out to kill him.

Scott Brick has recorded bestsellers and Pulitzer Prize winners in every conceivable category, over 800 titles since his debut in 1999. A Grammy nominee, Scott has won over fifty Earphones Awards, five Audie Awards, and has twice been named Publishers Weekly’s Narrator of the Year. After AudioFile Magazine proclaimed him a Golden Voice, his work was thereafter profiled in The Wall Street Journal, The New York Times, The Los Angeles Times, and Entertainment Weekly. In 2015, Scott began teaching the nation’s first fully-accredited university course devoted solely to audiobook narration at UCLA.