Murder at the Mission: A Frontier Killing, Its Legacy of Lies, and the Taking of the American West (Paperback) 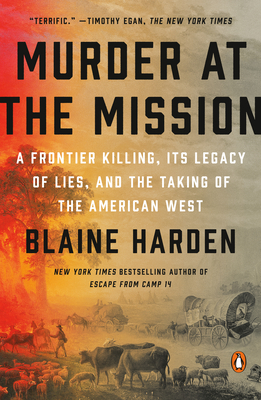 Finalist for the 2022 Will Rogers Medallion Award

“A riveting investigation of both American myth-making and the real history that lies beneath.” –Claudio Saunt, author of Unworthy Republic

From the New York Times bestselling author of Escape From Camp 14, a “terrifically readable” (Los Angeles Times) account of one of the most persistent “alternative facts” in American history: the story of a missionary, a tribe, a massacre, and a myth that shaped the American West

In 1836, two missionaries and their wives were among the first Americans to cross the Rockies by covered wagon on what would become the Oregon Trail. Dr. Marcus Whitman and Reverend Henry Spalding were headed to present-day Washington state and Idaho, where they aimed to convert members of the Cayuse and Nez Perce tribes. Both would fail spectacularly as missionaries. But Spalding would succeed as a propagandist, inventing a story that recast his friend as a hero, and helped to fuel the massive westward migration that would eventually lead to the devastation of those they had purportedly set out to save.

As Spalding told it, after uncovering a British and Catholic plot to steal the Oregon Territory from the United States, Whitman undertook a heroic solo ride across the country to alert the President. In fact, he had traveled to Washington to save his own job. Soon after his return, Whitman, his wife, and eleven others were massacred by a group of Cayuse. Though they had ample reason - Whitman supported the explosion of white migration that was encroaching on their territory, and seemed to blame for a deadly measles outbreak - the Cayuse were portrayed as murderous savages. Five were executed.

This fascinating, impeccably researched narrative traces the ripple effect of these events across the century that followed. While the Cayuse eventually lost the vast majority of their territory, thanks to the efforts of Spalding and others who turned the story to their own purposes, Whitman was celebrated well into the middle of the 20th century for having "saved Oregon." Accounts of his heroic exploits appeared in congressional documents, The New York Times, and Life magazine, and became a central founding myth of the Pacific Northwest.

Exposing the hucksterism and self-interest at the root of American myth-making, Murder at the Mission reminds us of the cost of American expansion, and of the problems that can arise when history is told only by the victors.

Blaine Harden is a contributor to The Economist, PBS Frontline, and Foreign Policy, and has formerly served as The Washington Post's bureau chief in East Asia and Africa. He is the author of The Great Leader and the Fighter Pilot; Escape from Camp 14, an international bestseller published in 27 languages; A River Lost; and Africa: Dispatches from a Fragile Continent, which won a Pen American Center citation for a first book of non-fiction.

“A richly detailed and expertly researched account of how a concocted story [...] became a part of American legend . . . Harden’s deeply researched book, often from the letters and words of the principle figures themselves to rebuke lies told on their behalf, is not history revised. Murder at the Mission is history revealed.” —Spokesman Review

“[A] fascinating, well-written exposé . . . Harden skillfully brings to life the collision of myth and reality. He has managed to write a fittingly timely book that fits well into the post-Donald Trump era of false narratives, conspiracy theories, and cries of fake news.” —New York Journal of Books

"Harden’s vivid reconstruction illustrates the process of Western mythmaking, beloved of Americans when it paints them in a heroic light; and of cultural collision, with the Whitmans almost willfully ignoring the Cayuse worldview . . . A boon for those who like their history unadorned by obfuscation and legend." —Kirkus Reviews

"Harden meticulously outlines how one bitter minister crafted an outlandish lie out of the Whitmans' deaths, promoting a narrow vision of heroic white Christians destined to conquer the land, a vision that persisted into the twentieth century, echoing far beyond the Pacific Northwest." —Booklist

“[A] lively history . . . Enriched by dramatic storytelling and candid interviews with contemporary Cayuses, this immersive account illuminates how the tragedies of the past inform the present.” —Publishers Weekly

“A gifted writer and a tenacious sleuth, Blaine Harden has hit the reset button on a troubling cluster of myths that lie at the foundation of the Anglo-American settlement of the Pacific Northwest. Elucidating, captivating, skeptical of conventional assumptions, and doggedly on the scent of the truth, Murder at the Mission is narrative history at its very best.” —Hampton Sides, New York Times bestselling author of Blood and Thunder: An Epic of the American West

“In this remarkable history of dishonesty, greed, and perseverance, Harden exposes the chauvinistic and fictitious story that rests at the foundation of U.S. expansion in the Pacific Northwest. He shows how the lionizing of missionaries and mountain men created a triumphant, self-serving narrative that justified the dispossession of the region’s native inhabitants. And in the book’s indispensable conclusion, he describes how the Cayuse Indians survived the onslaught and are now working to rebuild their communities and restore their traditional homelands. Murder at the Mission is a riveting investigation of both American myth-making and the real history that lies beneath.” —Claudio Saunt, author of Unworthy Republic: The Dispossession of Native Americans and the Road to Indian Territory

“In crisp and engaging prose, Harden charts the birth, life, and (one hopes) death of a big American lie, exposing along the way a century-long list of willing collaborators: missionaries, Indian agents, newspaper editors, politicians, historians, plain old con men, and a university president. Murder at the Mission is narrative history that matters, made all the more necessary because the lie’s consequences for the Cayuse people are today as real, and raw, as ever.” —Scott W. Berg, author of 38 Nooses: Lincoln, Little Crow, and the Frontier's End