My Cat Yugoslavia: A Novel (Paperback) 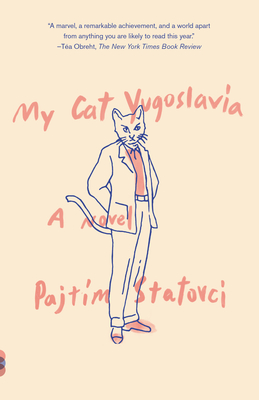 ONE OF THE BOSTON GLOBE'S BEST BOOKS OF THE YEAR

A love story about what it means to be an outsider from the most imaginative new voice in international fiction.

In 1980s Yugoslavia, a young Muslim girl is married off to a man she hardly knows, but what was meant to be a happy match goes quickly wrong. Soon thereafter her country is torn apart by war and she and her family flee. Years later, her son, Bekim, grows up a social outcast in present-day Finland, not just an immigrant in a country suspicious of foreigners, but a gay man in an unaccepting society. Aside from casual hookups, his only friend is a boa constrictor whom, improbably--he is terrified of snakes--he lets roam his apartment. Then, during a visit to a gay bar, Bekim meets a talking cat who moves in with him and his snake. It is this witty, charming, manipulative creature who starts Bekim on a journey back to Kosovo to confront his demons and make sense of the magical, cruel, incredible history of his family. And it is this that, in turn, enables him finally, to open himself to true love--which he will find in the most unexpected place.

Pajtim Statovci was born in 1990 and moved from Kosovo to Finland with his family when he was two years old. He holds an MA in comparative literature from the University of Helsinki. My Cat Yugoslavia is his first novel; it won the prestigious Helsingin Sanomat Literature Prize for a debut in the Finnish language.

“Fearless, delicate, beautiful, sad, haunting, and wonderful. A brilliant novel that mesmerizes with both its humanity and its utter uniqueness. A novel you’ll be thinking about long after you’ve turned the last page.”
—Jeff VanderMeer, author of City of Saints and Madmen

“Strange and exquisite, the book is a meditation on exile, dislocation, and loneliness.”
—The New Yorker

“Every once in a while, but not often, a book and author come along so original, so mature, and so timeless you might think you’re discovering a classic from the past. But My Cat Yugoslavia by Pajtim Statovci is very much a novel of and for today. It asks urgent questions about identity and family, humanity and nationality, symbols and metaphors, but refuses to give any simple answers. By embracing the complexity of our present world, Statovci has created a work of literature, and a work of art.” —David Ebershoff, author of The Danish Girl and The 19th Wife

“Spry and warm. . . . The novel is a slowly shattering and re-forming reflection of the protagonists’ corresponding descents into wintry numbness, until, near the end, they begin to revive, and to love. . . . Statovci’s surreal, arresting novel suggests that . . . love and identity have many reflections, many destinies, many languages. Sometimes, a broken mirror reflects something truer—as does the kind of love, drawn from the deepest sunken places, that tries to put it back together.”
—Gabrielle Bellot, The New Yorker’s Page-Turner blog

[Statovci] knows how to disorient—and disarm. . . . This dark debut has a daring, irrepressible spirit."
—The Atlantic

“A strange, haunting, and utterly original exploration of displacement and desire. . . . Statovci's literary gifts are prodigious. His sentences are lean and precise. He defies expectations, denies explanation, and excels at the most difficult aspect of storytelling: building a complex humanity for even his most deplorable characters. . . . a marvel, a remarkable achievement, and a world apart from anything you are likely to read this year.”
—Téa Obreht, The New York Times Book Review

“[My Cat Yugoslavia] is inventive and playful. . . . wonderful and original. . . . compelling and altogether beautiful.”
—Slate

“This beautiful novel is about a great many things: a snake and a sexy, sadistic, talking cat; online cruising and Balkan weddings; the surreal mess of identity; the things that change when we change our country and the things that never change; the heartbreaking antagonism between fathers and sons; the bewilderment of love. Pajtim Statovci is a writer of brilliant originality and power, and his debut novel conveys as few books can what life feels like now.”
—Garth Greenwell, author of What Belongs to You

“Powerful. . . . Dramatic. . . . Statovci is a tremendous talent. This debut novel—a deserved winner of the Helsingin Sanomat Literature Prize for Best First Novel in 2014—has an intensity and power that demands a second reading.”
—Library Journal (Starred)

“An elegant, allegorical portrait of lives lived at the margin. . . . A fine debut, layered with meaning and shades of sorrow.”
—Kirkus Reviews (Starred)

“Compelling . . . [an] important exploration of the aftershocks of war.”
—Publishers Weekly

"After this superb debut it's safe to say: this is a literary voice to follow.”
—Sofi Oksanen, author of When the Doves Disappeared

“Take one part Bulgakov, one part Kafka, one part Proust, and one part Murakami, shake and pour over an icy wit, and you have the devastatingly tart My Cat Yugoslavia. This book is a rallying cry for breaking conventions of structure and characterization, and it marks the debut of an irresistible new talent. I cannot wait to see what Pajtim Statovci does next.”
—Rakesh Satyal, author of Blue Boy and No One Can Pronounce My Name