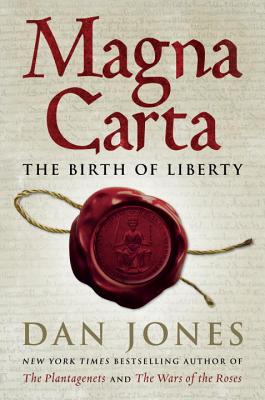 This is a succinct, action packed history of the tumultuous year 1215. King John (Lackland), a whole host of good and bad guys, and lots of battles and events are all contributing factors in the creation of the Magna Carta. Jones examines why this single document is so important and has such an enduring legacy.

"Dan Jones has an enviable gift for telling a dramatic story while at the same time inviting us to consider serious topics like liberty and the seeds of representative government." --Antonia Fraser From the New York Times bestselling author of The Plantagenets, a lively, action-packed history of how the Magna Carta came to be--by the author of The Templars The Magna Carta is revered around the world as the founding document of Western liberty. Its principles--even its language--can be found in our Bill of Rights and in the Constitution. But what was this strange document and how did it gain such legendary status? Dan Jones takes us back to the turbulent year of 1215, when, beset by foreign crises and cornered by a growing domestic rebellion, King John reluctantly agreed to fix his seal to a document that would change the course of history. At the time of its creation the Magna Carta was just a peace treaty drafted by a group of rebel barons who were tired of the king's high taxes, arbitrary justice, and endless foreign wars. The fragile peace it established would last only two months, but its principles have reverberated over the centuries. Jones's riveting narrative follows the story of the Magna Carta's creation, its failure, and the war that subsequently engulfed England, and charts the high points in its unexpected afterlife. Reissued by King John's successors it protected the Church, banned unlawful imprisonment, and set limits to the exercise of royal power. It established the principle that taxation must be tied to representation and paved the way for the creation of Parliament. In 1776 American patriots, inspired by that long-ago defiance, dared to pick up arms against another English king and to demand even more far-reaching rights. We think of the Declaration of Independence as our founding document but those who drafted it had their eye on the Magna Carta.

Dan Jones is the author of The Plantagenets: The Warrior Kings and Queen Who Made England, a #1 international bestseller and New York Times bestseller, and Wars of the Roses, which charts the story of the fall of the Plantagenet dynasty and the improbable rise of the Tudors. He writes and presents the popular Netflix series Secrets of Great British Castles and appeared alongside George R.R. Martin in the official HBO film exploring the real history behind Game of Thrones. He was closely involved in the British Library's landmark unification of the four remaining original copies of the Magna Carta to mark the charter's eight hundredth anniversary. He is also the author of Summer of Blood: England's First Revolution and is currently working on a history of the Knights Templar due out in September 2017.