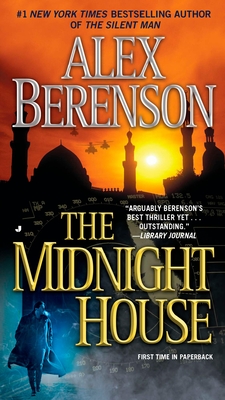 This is book number 4 in the A John Wells Novel series.

In Alex Berenson's fourth suspense thriller CIA agent John Wells must find out who is murdering members of a disbanded secret interrogation (torture) team who worked from a house in Poland called The Midnight House. Good entertaining read. For fans of Daniel Silva and Vince Flynn. — Sarah Knight

One morning, a former CIA agent is shot to death in the street. That night, an army vet is gunned down in his doorway. The next day, John Wells gets a phone call. Come to Langley. Now.

The victims were part of an interrogation team that operated out of a secret base in Poland called the Midnight House, where they worked over the toughest jihadis, extracting information by any means necessary. Now Wells must find out who is killing them. Islamic terrorists are the likeliest suspects, and Wells is uniquely qualified to go undercover and find them. But the trail of blood leads him to a place he couldn’t have imagined: Home.

Alex Berenson is the #1 New York Times bestselling author of the John Wells series, including The Faithful Spy, which won the 2007 Edgar Award for best first novel. As a reporter for The New York Times, Berenson covered topics ranging from the occupation of Iraq—where he was stationed for three months—to the flooding of New Orleans, to the world pharmaceutical industry, to the financial crimes of Bernie Madoff. He graduated from Yale University in 1994 with degrees in history and economics, and lives in New York City.

Praise for The Midnight House

“Berenson combines his thorough knowledge of the Middle East with an acquired sense of corporate intrigue in this bullet-paced, psychologically engaging tale of torture and espionage.”—The New York Times

“A superbly crafted spy thriller that doubles as a gripping mystery.”—Kirkus Reviews