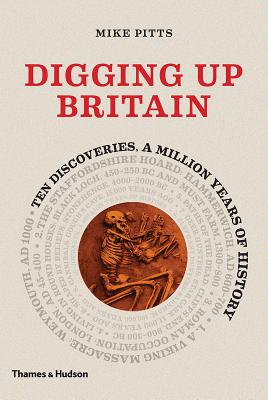 This is a very readable informative review of the most important archaeological finds in Britain in recent memory. Not only is this book insightful for the sites discussed but it also a review of the great changes in methodology, interpretation and diagnostics. Thoroughly enjoyable Pitts travels from the near past of AD 1000 to the far past of 400,000 years ago filled with cannibals, vikings and metal detectorists.

Digging Up Britain traces the history of Britain through key discoveries and excavations. With British archaeologist Mike Pitts as a guide, this book covers the most exciting excavations of the past ten years, gathers firsthand stories from the people who dug up the remains, and follows the latest revelations as one twist leads to another.

Britain, a historically crowded place, has been the site of an unprecedented number of discoveries—almost everywhere the ground is broken, archaeologists find evidence that people have been there before. These discoveries illuminate Britain’s ever-shifting history that we now know includes an increasingly diverse array of cultures and customs.

Each chapter of the book tells the story of a single excavation or discovery. Some are major digs, conducted by large teams over years, and others are chance finds, leading to revelations out of proportion to the scale of the original project. Every chapter holds extraordinary tales of planning, teamwork, luck, and cutting-edge archaeological science that produces surprising insights into how people lived a thousand to a million years ago.

Mike Pitts has been the editor of British Archaeology, Britain’s leading archaeology magazine, for over fifteen years, following and reporting on an extraordinary number of discoveries and scientific breakthroughs. He is an award-winning journalist and archaeologist who has researched subjects ranging from Easter Island to Stonehenge.