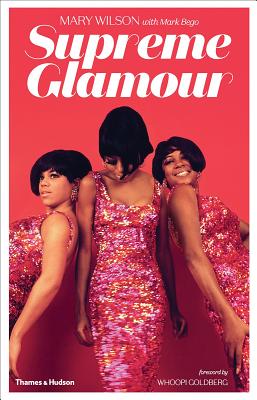 Sumptuously illustrated, engaging, and insightful, Mary Wilson’s book charts the glittering story of The Supremes, as it showcases their glamorous and iconic ensembles.

As Motown’s leading act in the 1960s, The Supremes became synonymous with glamorous, elegant, coordinated ensembles. Supreme Glamour presents founding member Mary Wilson’s unparalleled collection, showcasing thirty-two of the group’s most eye-catching gowns, meticulously reassembled and photographed on the Grammy Museum stage. Detailed captions accompany each photograph, providing information about the design, fabric, and embellishments of each ensemble, as well as the occasion on which each was first worn.

In addition to the fashion history of The Supremes, the book chronicles the evolution of the group and celebrates the cultural icons they became. Engaging and insightful narrative text by Mary Wilson and close personal friend Mark Bego is interspersed among hundreds of archival photos. Packed with anecdotes and insights, Mary Wilson tells the complete story of The Supremes, both on- and off- stage, from their founding in Detroit in 1959 as The Primettes to their 1964 breakthrough hit, “Where Did Our Love Go,” and from the departure of Diana Ross to The Supremes’ disco hits of the 1970s. Supreme Glamour builds a complete picture of the charm, sophistication, and magic of The Supremes.

Mary Wilson is one of the founding members of The Supremes.

Whoopi Goldberg is a household name; she’s one of the few people to have won an Emmy, Grammy, Oscar, and a Tony. She currently hosts the talk show The View.

The untold story of Supreme style... There is barely a black female pop act — Destiny’s Child, Janet Jackson, Janelle Monáe, Solange Knowles — (let alone a white one) that hasn’t taken a page from the Supremes look book... The volume chronicles how the Supremes...became agents of cultural change in the 1960s, breaking the race ceiling by weaponizing fashion and defining the way many women — black women, white women — wanted to look.
— The New York Times

Wilson, one of the original members of the Supremes, shares her collection of some of the lavish costumes she flaunted throughout the 1960s and ’70’s… [She] shares fun anecdotes as the Supremes gained popularity… Both entertaining and aesthetically pleasing, this book will appeal to Supremes fans and vintage fashion enthusiasts alike.
— Publishers Weekly

This lavish new book…chronicles the trio's history, with special attention paid to their fabulous, coordinated ensembles…. The photos are fantastic. Wilson details the context, explaining the performances linked with the dresses and what it felt like to be wearing these glamorous gowns.… Will be a hit with both music and fashion aficionados.
— Pop Culture Classics

This attractive hardcover book builds a complete picture of the charm, sophistication, and appeal of Motown’s leading act.
— Music Connection

A very personal, vividly illustrated story of [Wilson’s] life in the musical group.… The candid photographs provide a rich visual record of the stars’ life as performers. To see the gowns alongside Wilson’s down-to-earth accounts of what it felt like to wear them will be fun for enthusiasts of 1960s pop culture and The Supremes.
— Library Journal

Mary Wilson, a founding member of the Supremes, traces the history of the seminal Motown trio through their colorful, glamorous fashion, highlighting and examining 32 of the group’s most memorable gowns. (Bonus: The foreword is by Whoopi Goldberg.)
— New York Magazine

A glitter-tastic tour of [The Supremes’] meteoritic rise via the eye-popping fashions they became known for.
— O, The Oprah Magazine

Whether they wore Grecian gowns, bell-bottom pants or mini dresses, the Supremes were always stylish. In a hybrid photography book and memoir, Mary Wilson tells her side of the trio's story.
— The Atlanta Journal-Constitution

Music fans will enjoy Wilson’s insider perspective on Motown and the interactions between the group’s fluctuating members, while those with an interest in fashion will be dazzled by the glossy, full-color photos of the gowns.
— Booklist