The Right Way to Do Wrong (Paperback) 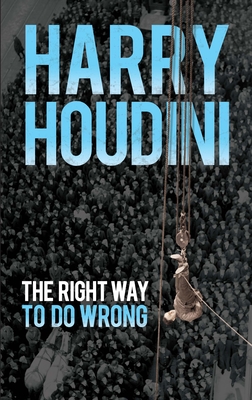 With this remarkable book, the legendary magician conducts a master class in crime by revealing the trade secrets of crooks. Harry Houdini is known not only as an illusionist and escaper of handcuffs and jail cells, but also as a debunker of phony spiritualists and other charlatans. His interest in exposing fakery led Houdini to interview both police and criminals around the world. The result is this captivating volume, intended to help readers avoid being victimized by pickpockets, con artists, and other thieves.
Written with verve and humor, these lively chapters recount the techniques of burglars, sneak thieves, shoplifters, and pickpockets as well as those of faith healers, fortune tellers, art forgers, card sharks, and counterfeiters. The instructive and amusing book concludes with an autobiographical essay, in which Houdini discusses the early days of his career and the experiences that contributed to his renown as the Handcuff King and Prison Breaker.

Born Erik Weisz in Budapest, Harry Houdini (1874-1926) ranks among the world's most renowned illusionists and escape artists. His sensational acts included escapes under extraordinary circumstances from ropes, chains, straightjackets, and handcuffs. Houdini wrote guides to magic tricks as well as books about his crusade against fake mediums and spiritualists.