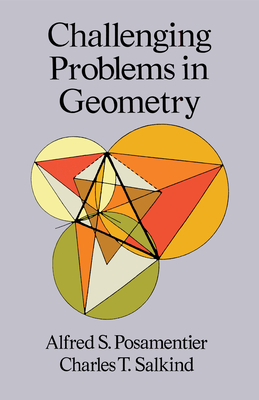 Designed for high school students and teachers with an interest in mathematical problem-solving, this volume offers a wealth of nonroutine problems in geometry that stimulate students to explore unfamiliar or little-known aspects of mathematics.Included are nearly 200 problems dealing with congruence and parallelism, the Pythagorean theorem, circles, area relationships, Ptolemy and the cyclic quadrilateral, collinearity and concurrency, and many other subjects. Within each topic, the problems are arranged in approximate order of difficulty. Detailed solutions (as well as hints) are provided for all problems, and specific answers for most.Invaluable as a supplement to a basic geometry textbook, this volume offers both further explorations on specific topics and practice in developing problem-solving techniques.

Al Posamentier is currently Dean of the School of Education and Professor of Mathematics Education at Mercy College, New York. He is Professor Emeritus of Mathematics Education at The City College of the City University of New York, and former Dean of the School of Education, where he was for 40 years. He is the author and co-author of more than 55 mathematics books for teachers, secondary and elementary school students, and the general readership. Dr. Posamentier is also a frequent commentator in newspapers and journals on topics relating to education. Alfred S. Posamentier: Math's Champion Dr. Alfred S. Posamentier, Professor Emeritus of Mathematics Education at New York's City College and, from 1999 to 2009, the Dean of City College's School of Education, has long been a tireless advocate for the importance of mathematics in education. He is the author or co-author of more than 40 mathematics books for teachers, students, and general readers including The Fascinating Fibonacci Numbers (Prometheus, 2007) and Mathematical Amazements and Surprises: Fascinating Figures and Noteworthy Numbers (Prometheus, 2009) His incisive views on aspects of mathematics education may often be encountered in the Letters columns and on the op-ed pages of The New York Times and other newspapers and periodicals. For Dover he provided, with co-author Charles T. Salkind, something very educational and also fun, two long-lived books of problems: Challenging Problems in Geometry and Challenging Problems in Algebra, both on the Dover list since 1996. Why solve problems? Here's an excerpt from a letter Dr. Posamentier sent to The New York Times following an article about Martin Gardner's career in 2009: Teachers shouldn't think that textbook exercises provide problem-solving experiences -- that's just drill. Genuine problem solving is what Mr. Gardner has been espousing. Genuine problem solving provides a stronger command of mathematics and exhibits its power and beauty. Something sorely lacking in our society.