The Jefferson Bible: The Life and Morals of Jesus of Nazareth (Paperback) 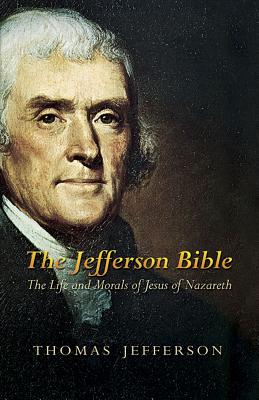 Perfect gift for someone yearning for the blessings of the Gospels - but tired of and confused by Big "C" Christianity. Jefferson actually took scissors to his bible and cut out what he considered not to be the honest teachings of Jesus. Gone is the supernatural, the political, the evangelical. What remains is love and service. The introduction by Dr Church is revelatory of Jesus and also of Jefferson. — Efton Jiles

Question with boldness even the existence of a god, Thomas Jefferson asserted, because if there be one, he must more approve of the homage of reason than that of blindfolded fear. America's third president regarded Jesus as a moral guide rather than a divinity, and in The Jefferson Bible, he highlights Christ's ethical teachings from the Gospels. Discarding the scriptures' supernatural elements and dogma, this volume reflects the deist view of religion, focusing on Jesus' message of absolute love and service.
Jefferson undertook his self-appointed task in 1794, consulting not only the King James Bible but also Greek, French, and Latin versions. He selected verses from the books of Matthew, Mark, Luke, and John, and arranged them in chronological order to form a single narrative. Although Jefferson shared his interpretation with friends and family, he declined to publish it, in keeping with his conviction that religion is a private matter -- and also to avoid providing his political enemies with ammunition. Not until the turn of the twentieth century did the book appear in print, when it became a tradition to present it to new members of Congress. Unique and influential, this volume reflects not only the thinking of one of the nation's most brilliant statesmen, but also the ideology of the Enlightenment era.

Architect, author, inventor, naturalist, and linguist -- Thomas Jefferson (1743-1826) would have been an extraordinary man even if he hadn't been the third President of the United States. A powerful advocate of liberty, this Founding Father is primarily remembered as the author of the Declaration of Independence.