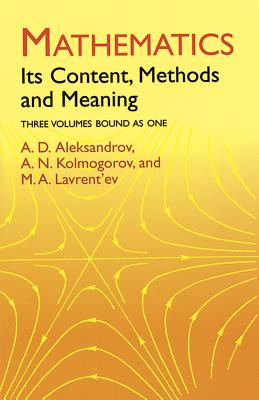 . . . Nothing less than a major contribution to the scientific culture of this world. -- The New York Times Book Review
This major survey of mathematics, featuring the work of 18 outstanding Russian mathematicians and including material on both elementary and advanced levels, encompasses 20 prime subject areas in mathematics in terms of their simple origins and their subsequent sophisticated developement. As Professor Morris Kline of New York University noted, This unique work presents the amazing panorama of mathematics proper. It is the best answer in print to what mathematics contains both on the elementary and advanced levels.
Beginning with an overview and analysis of mathematics, the first of three major divisions of the book progresses to an exploration of analytic geometry, algebra, and ordinary differential equations. The second part introduces partial differential equations, along with theories of curves and surfaces, the calculus of variations, and functions of a complex variable. It furthur examines prime numbers, the theory of probability, approximations, and the role of computers in mathematics. The theory of functions of a real variable opens the final section, followed by discussions of linear algebra and nonEuclidian geometry, topology, functional analysis, and groups and other algebraic systems.
Thorough, coherent explanations of each topic are further augumented by numerous illustrative figures, and every chapter concludes with a suggested reading list. Formerly issued as a three-volume set, this mathematical masterpiece is now available in a convenient and modestly priced one-volume edition, perfect for study or reference.
This is a masterful English translation of a stupendous and formidable mathematical masterpiece . . . -- Social Science

The Russian Equation Representative of the tremendous impact which Russian mathematicians have had on the Dover list since the Sputnik era is this outstanding book edited by A. D. Aleksandrov and others. Critical Acclaim for Mathematics: Its Content, Methods and Meaning: In effect, these volumes present a do-it-yourself course for the person who would like to know what the chief fields of modern mathematics are all about but who does not aspire to be a professional mathematician or a professional user of mathematics. The coverage is extremely wide, including such important areas as linear algebra, group theory, functional analysis, ordinary and partial differential equations, the theory of functions of real and complex variables, and related subjects. . . . What makes these volumes so readable as compared with usual mathematics textbooks is the emphasis here upon basic concepts and results rather than upon the intricate and wearying proofs that make such demands in conventional textbooks and courses. There are proofs in these volumes, but usually they are presented only for the most important results, and even then to emphasize key areas and to illustrate the kind of methodology employed. . . . It is hard to imagine that any intelligent American with a curious mind and some good recollection of his high school and college mathematics would not find many entrancing discoveries in the intellectual gold mine that is this work. -- The New York Times Book Review An excellent reference set for bright high school students and beginning college students . . . also of value to their teachers for lucid discussions and many good elementary examples in both familiar and unfamiliar branches. The intelligentsia of laymen who care to tackle more than today's popular magazine articles on mathematics will find many rewarding introductions to subjects of current interest. -- The Mathematics Teacher Whether a physicist wishes to know what a Lie algebra is or how it is related to a Lie group, or an undergraduate would like to begin the study of homology, or a crystallographer is interested in Fedorov groups, or an engineer in probability, or any scientist in computing machines, he will find here a connected, lucid account. -- Science