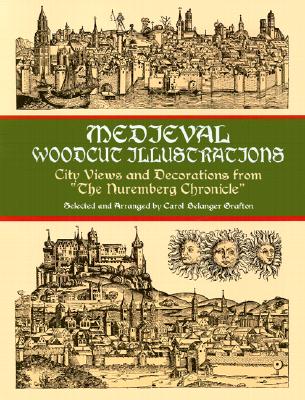 Perhaps the most elaborately illustrated book of the 15th century, The Nuremberg Chronicle ranks with the Gutenberg Bible in terms of its magnificent craftsmanship and unsurpassed excellence of design. A rich selection of plates from this 1493 history of the world, long a treasured favorite of collectors, is now available in this inexpensive edition.
This volume lovingly preserves the full grandeur of the original woodcuts, designed by the celebrated artists Michael Wolgemut and Wilheim Pleydenwurff. Some scholars believe that since Albrecht D rer was Wolgemut's student at the time of the book's production, it is possible that he too contributed to the illustrations of the Chronicle. The plates shown here depict 91 locales as they appeared in 15th century Athens, Paris, Rome, Vienna, Jerusalem, Venice, Prague, Munich, Nuremberg, Florence, and many more. Included are 51 city views, 26 of them double-page spreads, each one exhibiting a new mastery of perspective -- as this book embodies a stage in the evolution of art from the na ve to its more conscious form. An additional 143 miscellaneous illustrations of figures and decorative objects round out this volume, all of whose cuts emanated from the celebrated printing presses of Anton Koberger.