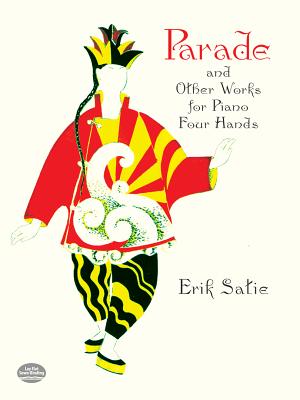 By Satie, Victor Rangel-Ribeiro (Editor)
Call or email to see if a used copy is available.
Out of Print

Throughout the history of music there has always been the contrapuntal struggle between convention and innovation. In the end, the true innovators make their mark and change the structure of music forever. Erik Satie, the great twentieth-century French composer, was just such an innovator.
Even though he was associated with the avant-garde artistic movements of early twentieth century Paris -- Cubism, Surrealism, Dadaism, and Neo-Classicism -- Satie neither aligned himself with any particular group nor followed a particular doctrine. Though formally trained, he was a true nonconformist, who struck out on his own path to develop a musical structure that reflected his unique personality and eccentricities.
This new compilation contains some of Satie's most enduring compositions -- piano works for four hands, originally published separately in early authoritative editions. "Parade," composed in 1916, and created in collaboration with Cocteau, Massine, and Picasso, was hailed as a "Cubist manifesto." Stripped of subjective emotion, the work removed basic fragments of melody and simple harmonies from their conventional associations, recasting them in unexpected but logical patterns -- mirroring the Cubist painters' transformation of everyday items into novel configurations. Also included here are such representative compositions as "La belle excentrique," "En habit de cheval," "Trois morceaux en forme de poire," "Trois petites pi ces mont es," and "Aper us d sag ables."
Students and performers of four-hand piano music will be thrilled to have this authoritative edition of "Parade" and other works by one of the twentieth century's most influential composers.