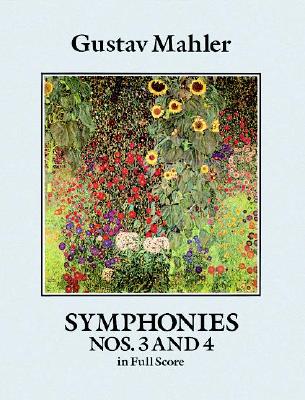 Mahler's third and fourth symphonies mark a turning point in his development as a composer. Symphony No. 3 (1896) predominantly follows the musical style of the earlier two symphonies, which tended to emphasize a single melodic line with subordinate harmonies. Symphony No. 4 (1900) embodies the more contrapuntal style that characterizes his later symphonic works. At the same time, these works bring Mahler to the end of his Wunderhorn years, when his inspiration derived strongly from Des Knaben Wunderhorn (The Youth's Magic Horn), an early 19th-century collection of folklike poetry that celebrated themes of nature.
The Third Symphony, scored for a massive orchestra, was conceived as a vast nature cycle in six movements. These include the great opening march, the moving setting for alto of Nietzsche's O Mensch Gib Acht and the scintillating bell song for women's and boys' choirs Es sungen drei Engel. The Fourth Symphony, more restrained in expression yet filled with affecting melody, is one of the most beloved of all Mahler's symphonies. Smaller in scale than the Third and classically proportioned, it progresses from the striking sleighbells of the opening and the rich complexities of the early movements to the deeply touching simplicity and beauty of the closing soprano song Das himmlishce Leben.
Now music lovers can study the orchestral richness of these two great Mahler scores, reprinted here from original Viennese editions. In the unusually diverse musical textures of these two contrasting symphonic masterworks, music professionals, and students alike can explore the genius of the composer often regarded as the last great Austrian symphonist.

Austrian composer and conductor Gustav Mahler (1860-1911) wrote chiefly symphonies and Lieder. Late Romantic in style, his tempestuous works reflect the anxious mood of Europe at the turn of the 20th century. Because of his Jewish roots, the composer's music was suppressed by the Nazis but has enjoyed a steady revival over the past five decades.