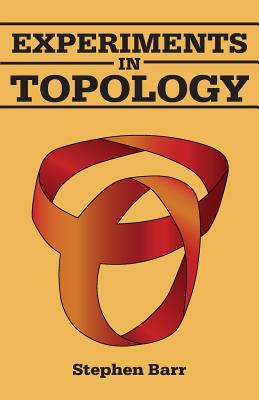 "A mathematician named Klein
Thought the Moebius band was divine.
Said he: 'If you glue
The edges of two,
You'll get a weird bottle like mine.' " -- Stephen Barr In this lively book, the classic in its field, a master of recreational topology invites readers to venture into such tantalizing topological realms as continuity and connectedness via the Klein bottle and the Moebius strip. Beginning with a definition of topology and a discussion of Euler's theorem, Mr. Barr brings wit and clarity to these topics:
New Surfaces (Orientability, Dimension, The Klein Bottle, etc.)
The Shortest Moebius Strip
The Conical Moebius Strip
The Klein Bottle
The Projective Plane (Symmetry)
Map Coloring
Networks (Koenigsberg Bridges, Betti Numbers, Knots)
The Trial of the Punctured Torus
Continuity and Discreteness ("Next Number," Continuity, Neighborhoods, Limit Points)
Sets (Valid or Merely True? Venn Diagrams, Open and Closed Sets, Transformations, Mapping, Homotopy) With this book and a square sheet of paper, the reader can make paper Klein bottles, step by step; then, by intersecting or cutting the bottle, make Moebius strips. Conical Moebius strips, projective planes, the principle of map coloring, the classic problem of the Koenigsberg bridges, and many more aspects of topology are carefully and concisely illuminated by the author's informal and entertaining approach.
Now in this inexpensive paperback edition, Experiments in Topology belongs in the library of any math enthusiast with a taste for brainteasing adventures in the byways of mathematics.