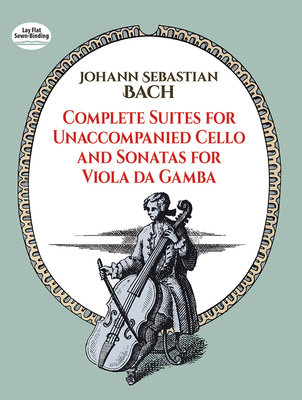 This superbly produced volume brings together a group of Bach's most performed compositions: nine works that masterfully reveal the deeply resonant glories of the cello and the viola da gamba. Reprinted here from the definitive Bach-Gesellschaft edition published by Breitkopf & H rtel of Leipzig, they include the six suites for unaccompanied cello (BWV 1007-1012) and three sonatas for viola da gamba and harpsichord (BWV 1027-1029), the latter most commonly played today on the cello. Alternative versions of the last two cello suites -- providing notation at concert pitch for the scordatura Suite No. 5, and normal cello clefs in place of the original alto and soprano clefs of Suite No. 6 -- appear in an appendix.
The cello suites, long neglected until Pablo Casals began to perform them early in the twentieth century, richly demonstrate Bach's intuitive feel for the cello, and his technical grasp of this instrument's extraordinary capabilities for musical expression. The three sonatas, among the few duo sonatas Bach composed, exuberantly demonstrate how Bach freed the harpsichord from a mere accompanying role and made it an equal partner in the duo texture.
This sturdily bound playing edition features wide margins and large noteheads clearly printed on fine-quality paper. It offers both amateur and professional musicians -- along with music lovers who enjoy following a live or recorded performance, score in hand -- a lifetime of pleasurable study and intimate enjoyment of a select group of Bach's most universally loved and admired works.

Johann Sebastian Bach (1685-1750) was a prolific German composer and organist whose sacred and secular works for choir, orchestra, and solo instruments exemplify the heart and soul of the Baroque period. A revival of interest and performances of his music began early in the 19th century and continue to this day. He is now widely considered to be one of the greatest composers in the Western tradition.