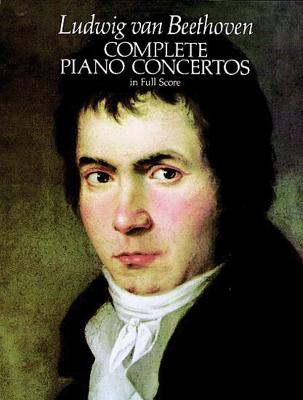 The five Beethoven piano concertos have long been staples of the pianist's repertoire and are perennial favorites of concert audiences. Here in one convenient volume are all five, reproduced directly from the authoritative Breitkopf and H rtel edition, including most of the composer's own cadenzas.
These concertos reveal the steady development of Beethoven's mastery of pianistic and orchestral resources through his early and middle periods. The first two, No. 1 in C Major, Op. 15 (1795), and No. 2 in B-flat Major, Op. 19 (before 1793), reflect the youthful exuberance of Beethoven's earlier style. No. 3 in C Minor, Op. 37 (1800), is one of the most successful embodiments of Beethoven's C Minor mood' (New Grove Dictionary) and No. 4 in G Major, Op. 58 (1805-1806), is considered a milestone in concerto development. No. 5 in E-flat Major, Op. 73 (Emperor, 1809), clearly illustrates Beethoven's further innovations in concerto structure.
Pianists, musicians, conductors, and students seeking to learn more about Beethoven's impact on musical history, and lovers of music in general, will appreciate having these concertos in one handy, inexpensive edition.

The triumphant genius of Ludwig van Beethoven (1770-1827) casts a long shadow over classical music -- no other composer of the past two centuries has exercised an influence more profound than his. A product of the classicist generation, he was the first of the Romantics, and his exhilarating works remain undiminished in their powers of enchantment.