Becoming Gold: Zosimos of Panopolis and the Alchemical Arts in Roman Egypt (Hardcover) 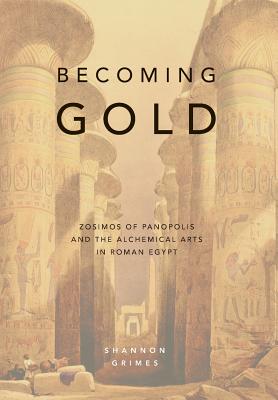 FOREMOST among the alchemists of the Hellenized world, the "divine" Zosimos practiced a sacred art in which metaphysical and metallurgical realities were fundamentally intertwined. Rather than being an exclusive product of Alexandrian syncretism, however, the dual spiritual and material emphasis of this alchemy reveals much deeper roots than expected: roots which extend deep into the religious cultures of the Ancient Near East. Through the methods of "cultural biography" and "thick description", Becoming Gold guides the reader deep into the temple culture of Roman Egypt, where the role of scribal priest intersects explicitly with the metallurgical craft traditions.

Going beyond generalizations, Grimes explores the metal-coloring techniques developed in Egyptian polychromic statuary, as well as the rituals of statue animation performed by the priests of the House of Life. In this light, Zosimos is increasingly revealed as a scribal priest responsible for preserving and translating ancient Egyptian metallurgical recipes; a high-ranking goldsmith who oversaw temple statue makers.

Against the wider backdrop of late antique religion and philosophy, Grimes also details the fascinating connections between alchemy, theurgy, and gnosticism. Here, Zosimos's spiritual attitudes are explored through the daimonic versus astrological influences upon alchemical operations; meditative practices using mirrors of electrum to attain divine gnosis; and the overarching imperative to transform the bonds of embodiment into vehicles for divinity. Zosimos reveals an alchemy in which spiritual and material realities are ultimately nondual; in which metals becomes living bodies for divine spirits; and in which the immortal soul--luminous and golden--radiates through its
material forms.