Desperate Hours: The Epic Rescue of the Andrea Doria (Paperback) 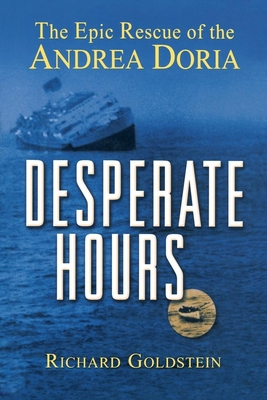 The Italian liner, Andrea Doria, collided with the Swedish ship, Stockholm, shortly after 11:00 PM on July 25,1956. The bow of the Stockholm, reinforced for traveling in icy Scandinavian waters, sliced deeply into the side of the Doria. Eleven hours later, the Doria settled to the bottom of the Atlantic. The rescue of over two thousand people on the severely listing liner in a dense fog at night provides gripping reading. This is a meticulously researched account of one of the last century's most momentous -- and highly public -- disasters. — Alden Graves

A stupendous feat of reportage.
-Ron Powers, cowriter of Flags of Our Fathers Praise for Desperate Hours ""Goldstein's book is packed with detail. . . . This description of the Doria's sinking is especially moving.""
-The New York Times ""A stupendous feat of reportage. Goldstein has virtually put us into lifeboats and sent us hurtling into the North Atlantic on the night of July 25, 1956.""
-Ron Powers, cowriter, Flags of Our Fathers, and author of Dangerous Water and Tom and Huck Don't Live Here Anymore On an extraordinary summer's night in 1956, in a fog off Nantucket, the world-renowned ocean liner Andrea Doria collided with the Swedish liner Stockholm and, eleven hours later, tragically sank. But in that brief time the Doria became, after the Titanic, the most storied vessel of the century, as nearly 1,700 people were saved in an unforgettable rescue punctuated by countless acts of heroism amid confusion, terror, and even cowardice. In the tradition of Walter Lord's A Night To Remember, Desperate Hours re-creates the ill-fated voyage, from the passengers' parting waves at Genoa, to their last evening highball in the Doria's lavish lounge, to the unbelievable realization that catastrophe was imminent. Richard Goldstein draws from dozens of interviews, court documents, memoirs, and reports that relate never-before-told stories. He also presents technical findings that shed light on the blame for the disaster. The result is a definitive history of a fateful day, a legendary liner, and a deadly shipwreck now considered by scuba divers to be the Mount Everest of the deep.

RICHARD GOLDSTEIN is an editor and writer for the New York Times, where he has worked since 1980. He is the author of America at D-Day and Mine Eyes Have Seen: A First-Person History of the Events That Shaped America, which was an alternate selection of the Literary Guild.