Hay Fever: How Chasing a Dream on a Vermont Farm Changed My Life (Hardcover) 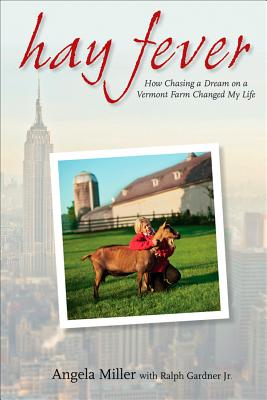 By Angela Miller, Ralph Gardner Jr.
$24.95
Hard to Find - May no longer be available

In this charming memoir, Miller recounts her double life as a successful New York literary agent and the almost accidental owner of Consider Bardwell Farm in nearby West Pawlet, producer of award-winning cheeses. A humorous, informative, inspiring book - with recipes. — Louise Jones

In the tradition of food memoirs like Under the Tuscan Sun and A Year in Provence, Hay Fever tells the story of New York City literary agent Angela Miller and how looking for tranquility on a Vermont farm turned into an eye-opening, life-changing experience. Seeking solace in the midst of midlife strife brought on by family stress and a high-stakes career, Miller and her husband bought a farm in rural Vermont.

But what started as a part time “project” turned into a full-blown obsession and culinary passion that not only changed their lives forever, but also resulted in some of America’s best cheeses, prestigious awards, and media fame. Today, cheeses from Consider Bardwell Farm are featured at some of the country’s best restaurants, including Jean Georges, Daniel, and The French Laundry.

•    For cheese lovers and would-be farmers, it’s an inside look at the everyday operation of a successful and growing dairy farm
•    Author Angela Miller, literary agent in New York City, has won prestigious awards for her cheeses and has been featured in such publications as the Boston Globe, the New York Times, Travel & Leisure, and Martha Stewart Living
•    More than a memoir—the book includes recipes from the author and top food personalities like Mark Bittman and Jean-Georges Vongerichten

Hay Fever is an inspiring and entertaining memoir that will whet the appetite of food lovers and would-be farmers from coast to coast.

ANGELA MILLER is a literary agent based in New York City and the owner of Consider Bardwell Farm in Vermont. Her cheeses are featured on the menus of some of the finest restaurants in the country, including The French Laundry, Per Se, Daniel, Blue Hill at Stone Barns, and Jean Georges. Consider Bardwell Farm has won several prestigious awards from the American Cheese Society. Read her blog at considerbardwellfarm.com and follow her on Facebook/ConsiderBardwellFarm and on Twitter/considercheese.