We Are Not One: A History of America’s Fight Over Israel (Hardcover) 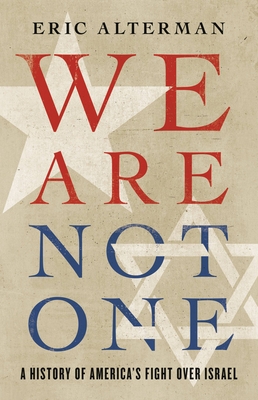 Fights about the fate of the state of Israel, and the Zionist movement that gave birth to it, have long been a staple of both Jewish and American political culture. But despite these arguments’ significance to American politics, American Jewish life, and to Israel itself, no one has ever systematically examined their history and explained why they matter.

In We Are Not One, historian Eric Alterman traces this debate from its nineteenth-century origins. Following Israel’s 1948–1949 War of Independence (called the “nakba” or “catastrophe” by Palestinians), few Americans, including few Jews, paid much attention to Israel or the challenges it faced. Following the 1967 Six-Day War, however, almost overnight support for Israel became the primary component of American Jews’ collective identity. Over time, Jewish organizations joined forces with conservative Christians and neoconservative pundits and politicos to wage a tenacious fight to define Israel’s image in the US media, popular culture, Congress, and college campuses. Deeply researched, We Are Not One reveals how our consensus on Israel and Palestine emerged and why, today, it is fracturing.

Eric Alterman is a CUNY distinguished professor of English at Brooklyn College and holds a PhD in US history from Stanford University. A contributing writer to the Nation and the American Prospect, he is the author of eleven previous titles, including the New York Times bestseller What Liberal Media?: The Truth About Bias and the News. He lives in New York.

“[A] fearless account…a scrupulous history of the crucial debates over Zionism, anti-Zionism, Palestine, the role of memory and the Holocaust, and America’s interactions with Israel.”—The New Yorker

"Alterman’s book is essen­tial read­ing for any­one who cares about what hap­pens next in the unfold­ing sto­ry of the Israel-Pales­tine conflict." —Jewish Book Council

“Historian Alterman (Lying in State) delivers a thought-provoking and thorough study of America’s political relationship with the modern state of Israel….Evenhanded yet incisive, this is an accessible history of a complex geopolitical matter and a persuasive call for more open-minded debate on an issue tearing at the fabric of the American Jewish community.”—Publishers Weekly

“The author employs rich contextual social and media history to reveal the lively intellectual discussions over the decades among the various factions… Illuminating history and a convincing case that Israel’s drift toward illiberalism has led to further divisiveness.”—Kirkus

“Alterman is fearless in tackling the controversial, sometimes toxic, US debate over Israel. Based on meticulous research, his thoughtful arguments make We Are Not One an absolutely riveting history of a debate critical to our understanding of Israel, American politics, and the future of the Middle East. It will be impossible to ignore.”—Kai Bird, coauthor of the Pulitzer Prize–winning American Prometheus

“Deeply researched and beautifully written, Alterman has sketched out the forces in the public debate that seek to influence and shape the image of Israel in the mind of America. With support for Israel still very strong in many quarters, he also tracks the increasing divisions, generational differences, and partisanship in America’s politics that have made discussion of Israel more complex than ever before. Spoiler alert: if you’re looking for the Israel of Leon Uris’s Exodus, you won’t find it here.”—Aaron David Miller, senior fellow, the Carnegie Endowment for International Peace

“Eric Alterman masterfully traces the long, fraught debate over Zionism that has shaped US policy and politics regarding Israel and, by extension, the Palestinians. His book is not just an excellent account of that crucial history, but an invaluable guide to where this still-vital conversation is headed in the twenty-first century.”—Hussein Ibish, senior resident scholar, Arab Gulf States Institute

“This is a magisterial work of history by one of the nation’s shrewdest, most eloquent commentators on politics and journalism. Alterman’s sharp, often witty judgments about what Israel has meant to Americans of all persuasions are both comprehensive and convincing. The influence of this erudite, passionate work should not just endure but grow larger over time.”—Michael Kazin, professor of history, Georgetown University

“We Are Not One offers a sweeping and definitive account of how America has thought and talked about Israel over the last seventy-five years. Eric Alterman applies his formidable talents to one of the trickiest of subjects, and the result is a book that strikes an impossible balance: massively knowledgeable, readable, fair-minded, and hard-headed. Both novice and expert will derive great benefit from this deeply engrossing book.”—David N. Myers, distinguished professor of history, UCLA

“In a lucid and highly accessible manner, Alterman tells the story of Israel in the American imagination with verve, humor, and honesty. Combining a deep and broad knowledge of the field with a journalist’s pen, Alterman leads his reader through the political, cultural, and identarian marshlands of American Jews’ struggle with the country they choose not to live in. We Are Not One is learned, fact-based, unvarnished, and full of fresh insights. Highly recommended.”—Shaul Magid, distinguished fellow in Jewish Studies, Dartmouth College