The Sun and the Moon: The Remarkable True Account of Hoaxers, Showmen, Dueling Journalists, and Lunar Man-Bats in Nineteenth-Century New York (Paperback) 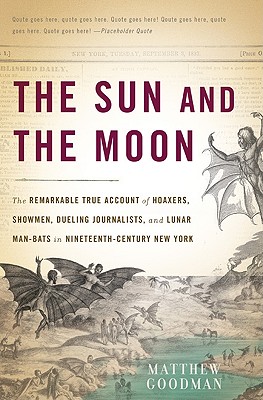 On August 26, 1835, a fledgling newspaper called the Sun brought to New York the first accounts of remarkable lunar discoveries. A series of six articles reported the existence of life on the moon -- including unicorns, beavers that walked on their hind legs, and four-foot-tall flying man-bats. In a matter of weeks it was the most broadly circulated newspaper story of the era, and the Sun, a working-class upstart, became the most widely read paper in the world.

An exhilarating narrative history of a divided city on the cusp of greatness, and tale of a crew of writers, editors, and charlatans who stumbled on a new kind of journalism, The Sun and the Moon tells the surprisingly true story of the penny papers that made America a nation of newspaper readers.

Matthew Goodman's nonfiction writing has appeared in the Forward, the American Scholar, Harvard Review, Brill's Content, and the Utne Reader. He is the author of Jewish Food: The World at Table. He lives in New York City with his wife and children.