Miss Me When I'm Gone: A Novel (Paperback) 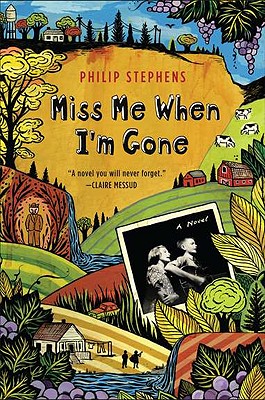 By Philip Stephens
$15.00
Email or call for price.

Down-on-his-luck fiddler Cyrus Harper searches for what he lost in a Missouri where folks devils rub shoulders with strippers. A high lonesome ballad of a book that evokes the cracked, weird America of both Bob Dylan and Will Oldham. — Charles Bottomley

"A lavishly written, vividly imagined, and wholly compelling work of fiction...I was spellbound. Often, in fact, I was in awe."—Tim O'Brien

After years of indie-label exile, folk singer Cyrus Harper returns to Apogee, Missouri, to tend to his mother. But the musical and haunted world of his past is morphing into just another strip of middle America, corrupted with pawn shops, meth labs, Clear Channel radio, and-if Cyrus's brother has his way-a golfer's paradise. As news of a murderess in the woods confounds the memories of his sister gone missing long ago, this prodigal son is drawn deeper into the cave- riddled realm of stalwarts and misfits he knew in his youth. What he discovers there will change everything.

A phantasmagoric tale of American music set during the crucible of its changing industry, Miss Me When I'm Gone plumbs our storied melodies for their essential purpose-to mine the soul for the longing, the passion, the love and rage that drive us.

Philip Stephens is the author of the poetry collection The Determined Days, which was a finalist for the PEN Center USA West Literary Award. His work as appeared in The Oxford American, Southwest Review, and Bomb, among other publications, as well as in Da Capo Best Music Writing 2004. He lives with his wife and sons in Kansas City, Missouri.

"A compelling and insightful depiction of not just the land and what haunts it, but of human desire . . . Stephens has made this part of the Ozarks an underdog we can get behind and root for. It resonates out of the pages like an old folk song."
-Noah Homola, The Kansas City Star

"Miss Me When I'm Gone is a lavishly written, vividly imagined, and wholly compelling work of fiction. Philip Stephens has an unfailing ear for the rhythms (and subtle treacheries) of human speech, which gives this book its unusual immediacy and power, as if the reader is eavesdropping on the life-or- death conversations of travelers on a train. I was spellbound. Often, in fact, I was in awe."
-Tim O'Brien

"Lost and living by their wits, Philip Stephens' wise and foolish people drift along the hardscrabble edges of America, some trying to escape the past, some to reclaim it. Miss Me When I'm Gone mixes the barbed language of Denis Johnson with the eternal verities of roots music. This is a rich and beautiful debut."
-Stewart O'Nan

"Philip Stephens is an uncommon writer: lyrical, frank, gothic by turns, his prose draws us into uncharted worlds and minds. He transforms small-town Missouri into a mythical landscape, peopled by lonely misfits of Faulknerian proportions. Miss Me When I'm Gone is a novel you will never forget."
-Claire Messud

"[A] many-layered, spirited debut . . . Stephens' voice has the clarity of an aged banjo, and resonates like a catchy sing-along."
-Jonathan Fullmer, Booklist

"Philip Stephens knows a lot-about music, religion, the great midwest, life in a small town. What he knows the most about, however, is the plain old human heart. At various times throughout this elegant, moving first novel, he wrote scenes that broke mine, because I had come to care so much for the people I found in these pages. Stephens is a special writer, and this is a special book. I was sorry when it ended."
-Steve Yarbrough "[In] Philip Stephens's rich debut novel . . . the magic realism of Garcia Marquez or a Vargas Llosa operates in a setting that evokes Twain, Faulkner, and O'Connor . . . in a river of song flowing beneath the Ozarks."
-Michael Ray Taylor, Chapter 16

"A gripping novel . . . speckled with colorful and amusing characters that add levity even as they propel the story . . . I recommend Miss Me When I'm Gone to anyone who is unafraid of facing an honest story that takes you deep into the world of struggling musicians, desperate mothers, meth addicts, sinful preachers, and an array of successes and failures that make up the realistic characters Stephens has created."
-Michael Carey, Neworld Review

Acclaim for The Determined Days: Poems by Philip Stephens

"Stephens has a realist fiction writer's flair for scene, speech, and character, and the incidents in his poems are as all-to-humanly true as those in a good John O'Hara short story...An excellent first collection."
-Booklist

"Read as a whole-as they should be-the cumulative effect of this truly accomplished collection is powerful, disturbing, and authoritative. I am filled with admiration for Mr. Stephens's work."
-Anthony Hecht

"A poet for the people, an accessible writer whose work fuses the beauty of Robert Frost with the conviction of Walt Whitman."
-Kansas City Star