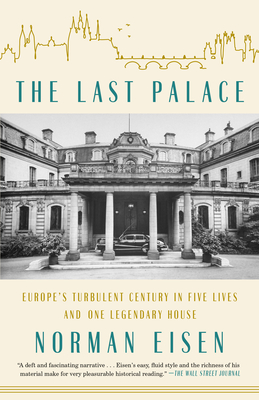 By Norman Eisen
$18.00
Click Title for IN STOCK Location

Eisen is uniquely qualified to write this book because, as U.S. Ambassador to Czechoslovakia, he was one of the most recent occupants of the palace built in Prague the 1920s by Otto Petschek. Eisen weaves an incredible story of the palace and its occupants, from Ashkenazi to Hollywood royalty, Nazis, communists, heroes, villains, and victims. The book extends from the 1920s through the Velvet Revolution to the present. The plot twists would rival any mystery. Eisen's own existence, not just his ambassadorship, winds around the thread of his own mother surviving the Holocaust, the Russian invasion, and rise of Communism. This book is fascinating,insightful and timely. — Maeve Noonan

A sweeping yet intimate narrative about the last hundred years of turbulent European history, as seen through one of Mitteleuropa’s greatest houses—and the lives of its occupants

When Norman Eisen moved into the US ambassador’s residence in Prague, returning to the land his mother had fled after the Holocaust, he was startled to discover swastikas hidden beneath the furniture in his new home. These symbols of Nazi Germany were remnants of the residence’s forgotten history, and evidence that we never live far from the past.

From that discovery unspooled the twisting, captivating tale of four of the remarkable people who had called this palace home. Their story is Europe’s, and The Last Palace chronicles the upheavals that transformed the continent over the past century. There was the optimistic Jewish financial baron, Otto Petschek, who built the palace after World War I as a statement of his faith in democracy, only to have that faith shattered; Rudolf Toussaint, the cultured, compromised German general who occupied the palace during World War II, ultimately putting his life at risk to save the house and Prague itself from destruction; Laurence Steinhardt, the first postwar US ambassador whose quixotic struggle to keep the palace out of Communist hands was paired with his pitched efforts to rescue the country from Soviet domination; and Shirley Temple Black, an eyewitness to the crushing of the 1968 Prague Spring by Soviet tanks, who determined to return to Prague and help end totalitarianism—and did just that as US ambassador in 1989.

Weaving in the life of Eisen’s own mother to demonstrate how those without power and privilege moved through history, The Last Palace tells the dramatic and surprisingly cyclical tale of the triumph of liberal democracy.

Norman Eisen is the author of A Case for the American People: The United States v. Donald J. Trump; Democracy’s Defenders; and The Last Palace. He was special counsel to the House Judiciary Committee from 2019 to 2020, including for the impeachment and trial of President Donald Trump. He previously served as ethics czar for President Barack Obama and then as his ambassador to the Czech Republic. Eisen is a senior fellow in Governance Studies at the Brookings Institution. He lives in Washington, D.C., with his family.

A Publishers Weekly, BookPage, and Pen America Best Book of 2018

“The book’s main characters are captivating. The palace itself has a ghostly allure.” —The Economist

“Meticulous… fascinating… Reading this book, you are reminded of the many missed opportunities that the United States and other Western allies had to encourage and assist democracy in Central Europe. It is not clear that we have learned from history as we are once again confronting nationalist, nativist and anti-democratic politicians and movements backed or amplified by Russia in Europe and beyond.” –Washington Post

“Yields illuminating insights on some of the twentieth century’s major dramas: the things that might have happened but didn’t, the importance of particular personalities, and the possibilities and limits of diplomacy in the face of power…Through his interweaving of the personal and the political, [Eisen] enlarges and enlivens our understanding of one small country’s confrontation with history, and of a past that matters to us all.” –The Times Literary Supplement

“Engrossing... This action-packed yet lyrically written page-turner confers a fascinating human understanding of Europe’s past and present.” —Publishers Weekly (starred)

“Eisen casts each successive caretaker of the palace as uniquely heroic and in so doing writes a wonderfully human history.” —Booklist (starred)

“Timely and engaging... a marvelous and original work of history... Eisen’s terrific book reminds us that unknown people do remarkable things all the time.” —The American Interest

“Norman Eisen has written an enthralling history of a palace and its very real ghosts. By telling the story of the Prague mansion where he resided as America’s ambassador, Eisen provides a poignant reflection on the haunting twists of the past century, including his own very American family tale.” —Walter Isaacson

“Moving, engaging, and elegantly written, The Last Palace wears its erudition lightly, casts its radiant intelligence fearlessly into the darkest corners of the twentieth century and, effortlessly, reliably, breaks your heart again and again.” —Michael Chabon

“Combining both the personal and the historical, Norman Eisen’s remarkable book transports us into the battle for democracy through the lives of people who fought to save it and those who would seek to destroy it. The Last Palace is not only a first-rate work of history, but a call to action written at a time of urgent need.” —Madeleine Albright

“At a time when we find ourselves newly nostalgic for courageous public officials and American leadership on behalf of human rights, Eisen has written a pearl of a book. Using an ornate palace in Prague as the backdrop for his fast-paced narrative, Eisen tells the tale of the last stormy century through the eyes of several vibrant characters who helped shape it — from a stubborn businessman who, Willy Wonka-like, builds an implausibly ornate palace as war clouds loom; to Shirley Temple Black, the Czech-American envoy who acts decisively in the side of dissidents during the Velvet Revolution; to Eisen himself, who, as Obama’s ambassador to the Czech Republic, raises his voice on behalf of human rights amid growing populism and extremism. The Last Palace is a great read and a stirring reminder of the importance of decency in public life.” —Samantha Power

“As America’s Ambassador in Prague, Norman Eisen had an extraordinary relationship with the Czech Republic and its history: his mother said the Nazis took her family out in boxcars and her son came back on Air Force One. The Last Palace combines human drama with geopolitical and historical sweep and does it with evident love and painstaking investigation.” —John Kerry

“Norman Eisen pulls back the curtains to reveal history’s secrets in this rich, personal, and wise book.” —Jane Mayer, author of Dark Money

“What a revelation! With this moving memoir and history, Norman Eisen enters the front rank of writers.  A truly riveting read.” —David Axelrod, author of Believer

“Enchanting and fascinating, The Last Palace is a splendid journey through a century of modern European history, and a love letter to liberal democracy. From the adventures of an obsessive baron to the anti-Communist resistance of ambassador-actress Shirley Temple Black to his own tenure as Barack Obama’s envoy to Prague, Norman Eisen brings the inhabitants of a storied residence, and their tumultuous times, to life.”  —Chris Whipple, author of the New York Times bestseller The Gatekeepers

“Eisen has written a book rich with detail, in spellbinding prose. The Last Palace reads like a novel—a page-turner— beautifully intertwining the compelling stories of families and individuals to tell a stirring story of the twentieth century.  The story is centered around a remarkable palace in Prague, but the story of the house is in fact the story of tragedy, cruelty, genocide, courage and its lack, from the 1920s through the Second World War and the Holocaust, the Prague Spring and brutal Communist rule in Czechoslovakia, the country’s subsequent freedom and its aftermath, up to the present day. I came to the book expecting a memoir, but The Last Palace is far more than that.” —Norm Ornstein

“The Last Palace is a great piece of work: a compelling story and so elegantly written. A wonderful read.” —David Corn

“A well-told story for readers interested in Czechoslovakia, its creation, its fall to fascism and then communism, and rescue from both.” —Kirkus Reviews

“The history of a remarkable mansion and its times…this fascinating work will appeal to those interested in 20th century history.” —Library Journal