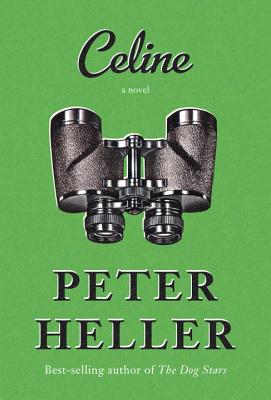 By Peter Heller
$25.95
Hard to Find - May no longer be available

Celine is one of those quiet many layered mysteries. Heller's ability to draw rich characters while not giving up secrets is a marvel. A widower so lost in his grief that he sacrifices his own child's well being and then is lost himself is the engine of the story. But the detective: Celine is a 68 year old emotive, emphysema ridden socialite who specializes in cold case lost persons is the real enigma. The other characters are the beautifully drawn landscapes. I don't know how Heller makes a pop up trailer a character in of itself but he does. — Maeve Noonan

“There should be an excused absence from life when a new Peter Heller novel is released to the world. There is a pace and a quality to his writing that will make you want to drink it down in one gulp. Heller's strong narrative voice and complex plotting have always stood out to me and Celine is another example of this. Loosely based on Heller's mother, Celine is a hard-nosed - if a bit worn down - private investigator living in post-9/11 Brooklyn. She has a stellar reputation, but when she is sent on a case to locate a young woman's missing father, it's clear that her age (and lifestyle) has caught up with her. You will fall in love with Celine and connect with everyone who populates this book. I would give just about anything to follow her on more adventures.”
— Katelyn Phillips (E), WORD, Brooklyn, NY

From the best-selling author of The Dog Stars and The Painter, a luminous, masterful novel of suspense--the story of Celine, an elegant, aristocratic private eye who specializes in reuniting families, trying to make amends for a loss in her own past.

Working out of her jewel box of an apartment at the base of the Brooklyn Bridge, Celine has made a career of tracking down missing persons, and she has a better record at it than the FBI. But when a young woman, Gabriela, asks for her help, a world of mystery and sorrow opens up. Gabriela's father was a photographer who went missing on the border of Montana and Wyoming. He was assumed to have died from a grizzly mauling, but his body was never found. Now, as Celine and her partner head to Yellowstone National Park, investigating a trail gone cold, it becomes clear that they are being followed--that this is a case someone desperately wants to keep closed. Inspired by the life of Heller’s own remarkable mother, a chic and iconoclastic private eye, Celine is a deeply personal novel, a wildly engrossing story of family, privilege, and childhood loss. Combining the exquisite plotting and gorgeous evocation of nature that have become his hallmarks, Peter Heller gives us his finest work to date.

PETER HELLER is the best-selling author of The Painter and The Dog Stars. He holds an MFA from the Iowa Writers' Workshop in both fiction and poetry. An award-winning adventure writer and a longtime contributor to NPR, Heller is a contributing editor at Outside magazine, Men's Journal, and National Geographic Adventure, and a regular contributor to Bloomberg Businessweek. He is also the author of several nonfiction books, including Kook,The Whale Warriors, and Hell or High Water: Surviving Tibet's Tsangpo River. He lives in Denver, Colorado.

"Heller impresses in this fine novel about parents and children and the secrets we try to keep from one another… The novel glows." —Marc Bojanowski, The New York Times Book Review

"In this gorgeously wrought story—equal parts character study and mystery—a young woman asks Celine, a badass Brooklyn private eye, to investigate the death of her father, a nature photographer who may or may not have been mauled and eaten by bears in Yellowstone… Captivating." —Entertainment Weekly’s "The Must List: Top 10 Things We Love This Week" Grade: A-

"Terrific... Celine is tough, tired, and very funny—exactly the sort of person you want to spend 300 pages with... It’s a pulpy, twisty plot... Heller stuffs it with tingling mysteries and thrilling solutions. He keeps everything moving thanks to an increasingly tense plot... Still, the best thing about Celine is that it’s a terrific piece of fiction." —Craig Fehrman, Outside Magazine

"Ingenious... Like Mark Twain and Toni Morrison, Heller is a rare talent... Irresistible suspense... Masterful, emotional and action-packed... One of this year's most unforgettable characters. It's as if Heller took the tender yet tough-as-nails personality of writer Annie Proulx and cast her on the page, in all her plainspoken, intellectually impeccable, deeply wise—and wise-ass—glory." —Lisa Shea, Elle

"Celine and Pete... launch a deceptively leisurely investigation showcasing Celine’s appreciation for public libraries and passion for firearms, venturing into international cover-ups, and culminating in hilarious showdowns in which wit is the mightiest weapon... This captivating, tender, brainy, and funny tale of the mysterious powers of beauty and grief, nature and family will leave readers hoping that Heller is planning a National Park series featuring this stealthy, irrepressible duo." —Donna Seaman, Booklist (Starred Review)

"Celine is a paradox, a Sarah Lawrence blue blood who is also a licensed PI, living near the Brooklyn Bridge... Heller blends suspense with beautiful descriptive writing of both nature and civilization to create a winner." —Robert E. Brown, Library Journal (Starred Review)