The Mark of the Assassin (The Michael Osbourne Novels #1) (Paperback) 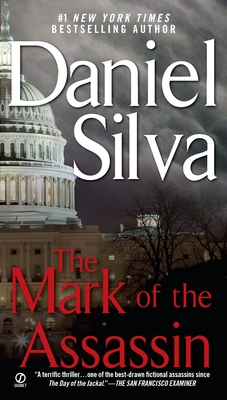 This is book number 1 in the The Michael Osbourne Novels series.

When a commercial airliner is blown out of the sky off the east coast, the CIA scrambles to find the perpetrators. A body is discovered near the crash site with three bullets to the face: the calling card of a shadowy international assassin. Only agent Michael Osbourne has seen the markings before—on a woman he once loved.

Now, it’s personal for Osbourne. Consumed by his dark obsession with the assassin, he’s willing to risk his family, his career, and his life—to settle a score…

A PEOPLE PAGE-TURNER OF THE WEEK

Daniel Silva is the #1 New York Times bestselling author of The Unlikely Spy, The Mark of the Assassin, The Marching Season, and the Gabriel Allon series, including The Kill Artist, The English Assassin, The Confessor, A Death in Vienna, Prince of Fire, The Messenger, The Secret Servant, Moscow Rules, The Defector, The Rembrandt Affair, Portrait of a Spy, The Fallen Angel, The English Girl, The Heist, The English Spy, The Black Widow, and House of Spies. His books are published in more than thirty countries and are bestsellers around the world.

“A terrific thriller…one of the best-drawn fictional assassins since The Day of the Jackal.”—The San Francisco Examiner

“Split-second suspense by an inventive ace of the genre.”—Newsday