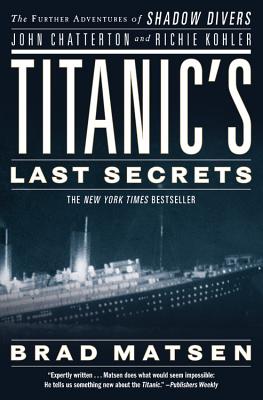 The discovery of a ribbon of steel apart from Titanic's two main bodies of wreckage prompted new theories as to what happened to the ship when it collided with ice in 1912. Among the many startling conclusions in this reexamination of the disaster is the probability that the White Star Line was aware of possible structural weaknesses in their new superliners. Dives to Titanic's sister ship, the ill-fated Britannic, at the bottom of the Aegean Sea, reinforces some of the speculation. A fascinating read. — Alden Graves

After rewriting history with their discovery of a Nazi U-boat off the coast of New Jersey, legendary divers John Chatterton and Richie Kohler decided to investigate the great enduring mystery of history's most notorious shipwreck: Why did Titanic sink as quickly as it did?

To answer the question, Chatterton and Kohler assemble a team of experts to explore Titanic, study its engineering, and dive to the wreck of its sister ship, Brittanic, where Titanic's last secrets may be revealed.

Titanic's Last Secrets is a rollercoaster ride through the shipbuilding history, the transatlantic luxury liner business, and shipwreck forensics. Chatterton and Kohler weave their way through a labyrinth of clues to discover that Titanic was not the strong, heroic ship the world thought she was and that the men who built her covered up her flaws when disaster struck. If Titanic had remained afloat for just two hours longer than she did, more than two thousand people would have lived instead of died, and the myth of the great ship would be one of rescue instead of tragedy.

Titanic's Last Secrets is the never-before-told story of the Ship of Dreams, a contemporary adventure that solves a historical mystery.

Bradford Matsen is the author of Descent: The Heroic Discovery of the Abyss as well as many other books about the sea and its inhabitants. He was a creative producer for the television series The Shape of Life, and his articles have appeared in Mother Jones, Audubon, and Nature, among other publications. He divides his time between Seattle and New York City.

John Chatterton and Richie Kohler contributed to the research of Titanic's Last Secrets, as they did for Robert Kurson's Shadow Divers, the 2005 Book Sense Nonfiction Book of the Year.

"Titanic's Last Secrets is a fresh, moving, and irresistible portrait of the doomed ship. Combining insightful character sketches, secret archives, forensic engineering, death-defying dives and suspenseful writing, Brad Matsen travels effortlessly between past and present and offers haunting new conclusions about Titanic: It did not have to happen this way. They did not have to die. I could not put this book down."

"If you think you know the story of the Titanic, think again. Brad Matsen's riveting book weaves new evidence from the depths with historical accounts to reveal the dark, hidden truths about the deadly voyage. John Chatterton and Richie Kohler's chilling discoveries propel a page-turning narrative to its shocking conclusion: What happened aboard the Titanic that night was far worse than anyone ever guessed."—Susan Casey, bestsellilng author of The Devil's Teeth: A True Story of Obsession and Survival Among America's Great White Sharks

The release of Titanic's Last Secrets, renders all other books on Titanic outdated and incomplete. A 'must have' book of 2008.'—Wreck Diving Magazine