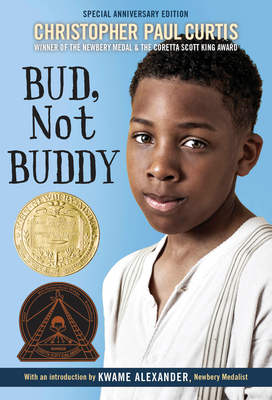 By Christopher Paul Curtis
$8.99
In Stock

Bud is an negro orphan during the depression. After a horrible experience with a foster family, he sets out to find the father he's never known using the only clue he has - a flyer his mom treasured featuring Jazz musician, Herman T. Calloway. Historical fiction, music references and compassionate adults determined to help Bud through his circumstances makes this one of the best books I've ever read. — Gail Cosgriff

Newbery Award Winner for 2000. Escaping from his fourth foster home, Bud strikes out on his own, attempting to find his father. The only lead he has is an old playbill once belonging to his mother. Told with humor, your heart will nevertheless go out to Bud as he bravely searches for his place in the world. — Jessica Wood

It’s 1936, in Flint, Michigan. Times may be hard, and ten-year-old Bud may be a motherless boy on the run, but Bud’s got a few things going for him:

1. He has his own suitcase full of special things.
2. He’s the author of Bud Caldwell’s Rules and Things for Having a Funner Life and Making a Better Liar Out of Yourself.
3. His momma never told him who his father was, but she left a clue: flyers advertising Herman E. Calloway and his famous band, the Dusky Devastators of the Depression!!!!!!

Bud’s got an idea that those flyers will lead him to his father. Once he decides to hit the road to find this mystery man, nothing can stop him—not hunger, not fear, not vampires, not even Herman E. Calloway himself.

“Curtis writes with a razor-sharp intelligence that grabs the reader by the heart and never lets go. . . . This highly recommended title [is] at the top of the list of books to be read again and again.” —Voice of Youth Advocates, Starred

Christopher Paul Curtis is the author of the Newbery Honor–winning The Watsons Go to Birmingham—1963.

“The book is a gem, of value to all ages, not just the young people to whom it is aimed.” —The Christian Science Monitor

“Curtis writes with a razor-sharp intelligence that grabs the reader by the heart and never lets go. . . . This highly recommended title [is] at the top of the list of books to be read again and again.” —Voice of Youth Advocates, starred review