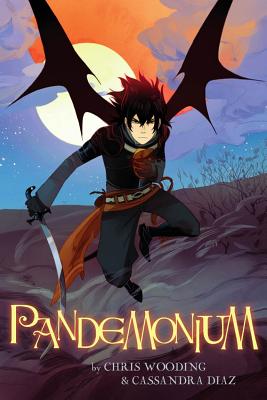 By Chris Wooding, Cassandra Diaz (Illustrator)
$12.99
Hard to Find - May no longer be available

From a small village in the middle of nothing; plays Skull Ball; has a grandfather who is crazy but really nice; and a father who doesn’t understand him Seife is pretty normal. But when kidnapped and made to cover for the missing prince of the realm, fooling sisters, a giant cat (who has a nasty habit of trying to eat him) and trying not to make a fool of himself at royal dinners are the least of his problems. There is this little thing about the neighboring kingdom wanting to invade them and Seife is expected to lead the army! What is a poor boy to do? The Price and the Pauper tale is turned on its head in a funny and macabre tale! — Jeanette

Seifer's life is about to become a royal pain. . . . As captain of the local skullball team, Seifer Tombchewer is the envy of his peers. He's fast, he's strong, and he flies circles around the competition. But Seifer's always dreamed of more--of leaving his tiny, remote village for a new life beyond the mountains.

He just never dreamed it would happen like this. Knocked unconscious and abducted, Seifer awakens in the royal palace to learn that Prince Talon Pandemonium has gone missing. And since Seifer is a ringer for Talon, it's his duty to replace the missing royal in his roles of diplomat, warrior, and Lord Defender of the Realm.

Chris Wooding and debut artist Cassandra Diaz team for a classic tale of mistaken identity set against the breathtakingly original backdrop of the Darkling Realm.

Chris Wooding began writing at the age of 16, and his first novel Crashing was published when he was 19. Since that time, he's written dozens of novels in several genres, notably the award-winning The Haunting of Alaizabel Cray; Poison; Storm Thief; the Malice series; and the graphic novel, Pandemonium.

Cassandra Diaz is a recent graduate of the Maryland Institute College of Art. She lives in Houston, Texas. Pandemonium is her first published work.

((star)) "This nail-biter will keep readers glued to the story until the very last page is turned.... Wooding has fashioned an elaborate fantasy in which the world is dark and the peril is real." - School Library Journal, starred review

"What seems to be a typical horror plot takes several delicious twists as the teens learn more about their surroundings.... The creative formatting, fast pace, and classic horror elements will surely satisfy any teen who loves a good scare." - The Bulletin for the Center of Children's Books