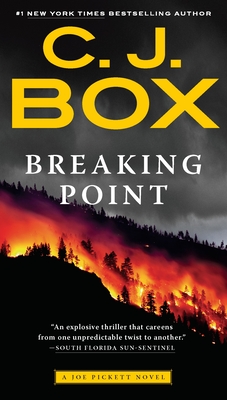 This is book number 13 in the A Joe Pickett Novel series.

Following the murders of two EPA agents, Joe Pickett's involvement in the manhunt doesn't sit well with the federal officers in charge. Pickett knows the man they are hunting and is shocked by the crime, but he also knows there is something very wrong with the case. A solid and fast paced thriller. — Sarah Donner

Wyoming game warden Joe Pickett’s hunt for a fugitive reveals a conspiracy in this taut thriller in the #1 New York Times bestselling series.

Joe Pickett always liked Butch Roberson—a hardworking local business-owner whose daughter is friends with his own. Little does he know that when Butch says he is heading into the mountains to scout elk, he is actually going on the run.

Two EPA employees have been murdered, and all signs point to Butch as the killer. Soon, Joe hears of the land Butch and his wife had bought to retire on—until they are told the EPA declared it a wetland—and the penalties they charged Butch until the family was torn apart by debt. Finally, it seems, the man just cracked.

It’s an awful story. But is it the whole story? The more Joe investigates, the more he begins to wonder—and the more he finds himself in the middle of a war in which he must choose sides.

C. J. Box is the #1 New York Times bestselling author of the Joe Pickett series, five stand-alone novels, and the story collection Shots Fired. He has won the Edgar, Anthony, Macavity, Gumshoe, and two Barry awards, as well as the French Prix Calibre .38 and a French Elle magazine literary award. His books have been translated into twenty-seven languages. He and his wife Laurie split their time between their home and ranch in Wyoming.

“An explosive thriller that careens from one unpredictable twist to another.” —South Florida Sun-Sentinel

“An exceptionally well-told story that will entertain, thrill and maybe even outrage its readers.”—USA Today

“Fans of this series will burn through the pages…Another must-read.”—Library Journal (starred review)

More Praise for the C. J. Box and the Joe Pickett novels

“Picking up a new C. J. Box thriller is like spending quality time with family you love and have missed...It’s a rare thriller series that has characters grow and change. An exciting reading experience for both loyal fans as well as newcomers.”—Associated Press

“Box knows what readers expect and delivers it with a flourish.”—Cleveland Plain Dealer

“Will keep you on the edge of your seat.”—The Philadelphia Enquirer