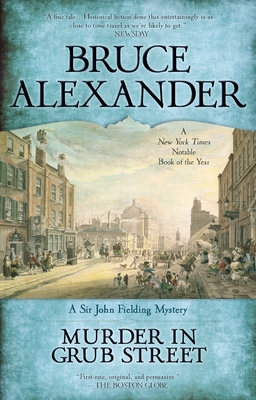 Reissue of the second of the late Alexander's outstanding series set in London in the 1760s, featuring a real historical figure: the blind justice Sir Henry Fielding, founder of the Bow Street Runners police squad and brother of the novelist Henry Fielding.

The crime appeared as easily solved as it was wicked. A Grub Street printer, his family, and two apprentices brutally murdered in their sleep. A locked building. And at the scene, a raving mad poet brandishing a bloody axe. Surely the culprit had been found, and justice would be swift and severe.

But to Sir John Fielding, justice was more than finding a culprit-it was finding the truth. Aided by thirteen-year-old Jeremy Proctor, Fielding decided to investigate further. And the truth behind the Grub Street massacre was more evil-and more deadly-than the dastardly crime itself.

Bruce Alexander is the pseudonym for a well-known author of fiction and non-fiction. The previous books in this series are Blind Justice, Murder in Grub Street (Named by The New York Times Book Review as a Notable Book in 1995), Watery Grave, Person or Persons Unknown (named by the Chicago Tribune as one of the best novels of 1997), Jack, Knave and Fool, and Death of a Colonial.