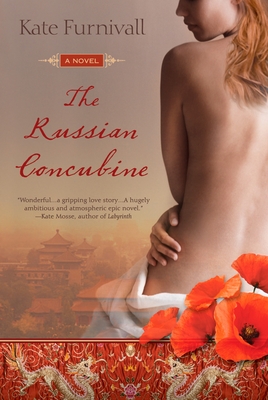 Set in 1928 China, Kate Furnivall's novel The Russian Concubine tells the story of sixteen year old Lydia Ivanova, a White Russian refugee living with her mother in the 1930's Chinese International Settlement, and her love affair with a young Chinese Communist. Furnivall's attention to period details allows the reader to smell the filth, see the lice, taste the food and be entertained by the intrigue and adventures of a spunky heroine. — Sarah Knight

A sweeping novel set in war-torn 1928 China, with a star-crossed love story at its center.

In a city full of thieves and Communists, danger and death, spirited young Lydia Ivanova has lived a hard life. Always looking over her shoulder, the sixteen-year-old must steal to feed herself and her mother, Valentina, who numbered among the Russian elite until Bolsheviks murdered most of them, including her husband. As exiles, Lydia and Valentina have learned to survive in a foreign land.

Often, Lydia steals away to meet with the handsome young freedom fighter Chang An Lo. But they face danger: Chiang Kai Shek's troops are headed toward Junchow to kill Reds like Chang, who has in his possession the jewels of a tsarina, meant as a gift for the despot's wife. The young pair's all-consuming love can only bring shame and peril upon them, from both sides. Those in power will do anything to quell it. But Lydia and Chang are powerless to end it.

Kate Furnivall was born in Wales and currently lives in Devon, England. Married and the mother of two sons, she has working in publishing and television advertising. She drew inspiration for The Russian Concubine from her mother’s experiences as a White Russian refugee in China.