Who Was Ponce de León? (Who Was?) (Paperback) 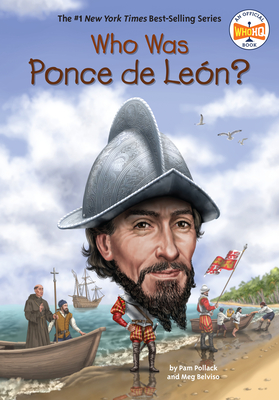 Learn the story of Spanish conquistador Juan Ponce de León and how he shaped the history of both Florida and Puerto Rico during the Age of Exploration in this new book from the #1 New York Times bestselling series.

In the early 1500s, Ponce de Leon was one of the most important Spanish military figures in the Caribbean. He made his first voyage across the Atlantic with Christopher Columbus and then, after years of battle with the native Taino, became the first governor of Puerto Rico. Although the story of his search for the Fountain of Youth is entirely fictional, his noteworthy expedition to - and naming of - Florida is one of his greatest legacies.

Pam Pollack and Meg Belviso are authors of several Who HQ books, including Who Is George Lucas?, Who Was Alfred Hitchcock?, Who Is Neil deGrasse Tyson?, and Who Was Celia Cruz?