The Case of the Deadly Desperados (Hardcover) 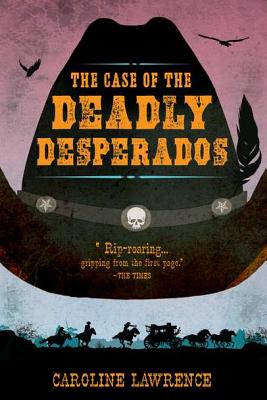 P. K. Pinkerton is a master of disguise. Or at least Pinky thinks so. After Pinky’s foster parents are killed, Pinky goes into hiding. But the Nevada Mountains are dangerous and people will do anything to get the land deed Pinky has. Humor, mystery and historical fact blend together for this aged 10 to 14 year-old readers. First in series. — Jeanette

“P.K. Pinkerton is on the run from murdering thieves who want his deed to a silver mine. Scrambling through disguises, taverns, and dark alleys in a Wild West town, Pinky's biggest disadvantage is not being able to distinguish people's emotions, which makes it very hard to know who is lying and cheating and who, if anyone, is telling the truth. This is high-speed fun, with a sympathetic hero.”
— Ellen Davis, Dragonwings Bookstore, Waupaca, WI

Introducing P.K. Pinkerton, Master of Disguise When twelve-year-old P.K. (Pinky) Pinkerton's foster parents are murdered by Whittlin' Walt and his gang of ruthless desperados, Pinky goes on the run and is forced into hiding with Ma's priceless last possession: the deed to a large amount of land and silver mines in the Nevada Mountains. But relying on disguises will only keep Pinky hidden for so long, and the desperados are quickly closing in . . . Narrated by the incredibly lively Pinky, this thrilling high-speed chase through the Wild West will keep readers on the edge of their seats until the very last page.

Caroline Lawrence is an English-American author who was born in London and grew up in Bakersfield, California. She currently lives in London, England.

Praise for PK PINKERTON AND THE DEADLY DESPERADOS:


FROM THE NEW YORK TIMES:
“Curious, clever, and very funny…P.K.'s journey is very much a metaphor for an autistic experience. Lawrence powerfully conveys both the difficulties of living with autism and the autistic mind's distinctive strengths. Any child who's felt like a 'Misfit' or 'Freak of Nature' as P.K. does will identify with his despair and cheer him.”


STARRED REVIEW FROM BOOKLIST:
“A winning blend of Wild West and classic detective lore, this first book in the Western Mysteries series is a fast-paced, engrossing read, from beginning to end.”


FROM THE BULLETIN OF THE CENTER FOR CHILDREN’S BOOKS:
“Wild chases, wilder disguises, goofy humor, wordplay, a delightfully gruesome end for Whittlin’ Walt, and a strong hint of episodes to come all provide a passel of good readin’.”


FROM HORN BOOK:
“[A] bang-up series starter, …[this] strongly voiced account succeeds as a rousing adventure that promises more action in another installment just around the corner.”


FROM VOYA:
“[Q]uick paced and engaging, moving from one escapade to the next without ever slowing down.”