Never Broken: Songs Are Only Half the Story (Paperback) 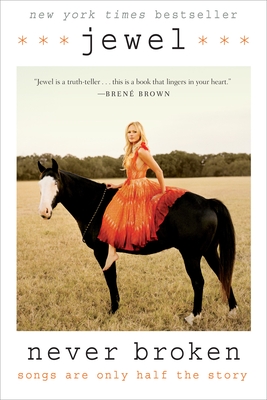 “Jewel is a truth-teller…this is a book that lingers in your heart.” – Brené Brown
*The New York Times bestseller*

New York Times bestselling poet and multi-platinum singer-songwriter Jewel explores her unconventional upbringing and extraordinary life in an inspirational memoir that covers her childhood to fame, marriage, and motherhood.

When Jewel’s first album, Pieces of You, topped the charts in 1995, her emotional voice and vulnerable performance were groundbreaking. Drawing comparisons to Joan Baez and Joni Mitchell, a singer-songwriter of her kind had not emerged in decades. Now, with more than thirty million albums sold worldwide, Jewel tells the story of her life, and the lessons learned from her experience and her music.
Living on a homestead in Alaska, Jewel learned to yodel at age five, and joined her parents’ entertainment act, working in hotels, honky-tonks, and biker bars. Behind a strong-willed family life with an emphasis on music and artistic talent, however, there was also instability, abuse, and trauma. At age fifteen, she moved out and tasked herself with a mission: to see if she could avoid being the kind of statistic that her past indicated for her future. Soon after, she was accepted to the prestigious Interlochen Arts Academy in Michigan, and there she began writing her own songs as a means of expressing herself and documenting her journey to find happiness. Jewel was eighteen and homeless in San Diego when a radio DJ aired a bootleg version of one of her songs and it was requested into the top-ten countdown, something unheard-of for an unsigned artist. By the time she was twenty-one, her debut had gone multiplatinum.
There is much more to Jewel’s story, though, one complicated by family legacies, by crippling fear and insecurity, and by the extraordinary circumstances in which she managed to flourish and find happiness despite these obstacles. Along her road of self-discovery, learning to redirect her fate, Jewel has become an iconic singer and songwriter. In Never Broken she reflects on how she survived, and how writing songs, poetry, and prose has saved her life many times over. She writes lyrically about the natural wonders of Alaska, about pain and loss, about the healing power of motherhood, and about discovering her own identity years after the entire world had discovered the beauty of her songs.

Jewel is an American singer, songwriter, poet, actress, philanthropist, and mother. She has received four Grammy Award nominations and has sold more than thirty million albums worldwide. She is the founder of Project Clean Water, and author of the New York Times bestseller A Night Without Armor: Poems as well as two books for children. Raised in Homer, Alaska, Jewel currently lives in Tennessee and Colorado with her son.

“Jewel is a truth-teller. Never Broken occupies that sacred space of soulful storytelling, hard-earned wisdom, and beautiful writing. I couldn’t put it down and I can’t stop thinking about it. This is a book that lingers in your heart.”
—Brené Brown, Ph.D., author of Rising Strong

“From the very beginning of her recording career, Jewel's lyrics reflected the America she lived in with her conversational poetic touch. My friend Ben Keith brought her to my ranch to record, collecting our favorite musicians together for her early songs. The result, the enduring Pieces of You, was a great record. Jewel's lyrics resonated with the times. In this, her first memoir, she has a lot to reflect on, and the touch to tell her story well.”
—Neil Young

“Never Broken reads like one of Jewel's songs—it's vulnerable, passionate and forthright. And it tells a compelling story, in this case, one about a young gifted woman's journey to becoming an adult and an artist. Her writing, too, is like her voice, which, bolstered by sturdy melodies, rings with honesty and clarity. This book is filled with deep, rewarding pleasures.”
—Anthony DeCurtis, Contributing Editor, Rolling Stone

“Jewel’s life in Never Broken reminded me so much of my own. But if we hadn’t of come from hardship and nothing, we wouldn’t have made something out of ourselves. Her life is in her songs and in her voice, and after knowing her, I know it’s her soul. She is honest and tender, yet has a backbone and a fire that only comes from her roots. In her stories about her childhood I can’t help but see so much of my own. The good, the bad, the love, the heartbreak. It's all there and it’s all Jewel.”
—Loretta Lynn

“Jewel renders an intimate portrait of a young woman who, although immensely talented, has spent her life "surviving and recovering and problem solving since being a toddler." [Never Broken] is lushly descriptive, chronicling the author's earliest days on the old "homestead," singing in saloons, busking in Mexico, and later living out of broken-down automobiles while trying to make a living in the music business. The author mines her psyche for the benefit of both herself and anyone else embroiled in profound emotional crisis….A moving musical essay that should strike all the right notes with a wide selection of readers.”
—Kirkus

Jewel’s evocative and captivating how-to for living a full and creative life…Jewel’s writing is conversational poetry, filled with rich details, as she explores her heritage or explains what she taught herself about music, art, and the music business….Her book will delight her fans, [and] reach beyond that base to those intrigued by what it takes to be successful after years of plugging away. Jewel’s lyrics, generously included throughout, reflect her authenticity and generosity.”
—Publishers Weekly

“Singer, and poet Jewel has lived a famous rags-to-riches story and now tells all the painful details of her turbulent life in this appealing memoir….Fans will be impressed by the singer’s tenacity and most likely shocked [as] she chronicles her struggle to earn a living, regain control of her finances, and maintain her marriage…Her determination to carve out a happy life in the midst of so much conflict is admirable, and her honesty is both bracing and appreciated….her story is sure to inspire.”
—Booklist, STARRED REVIEW

“A deeply personal memoir [that] reveals a cycle of struggles and abuse that, until now, she had kept private….Jewel reflects on an abusive upbringing and the highs and lows of her professional career, including discovering that she was broke at what should have been the pinnacle of success.”
—The Tennessean