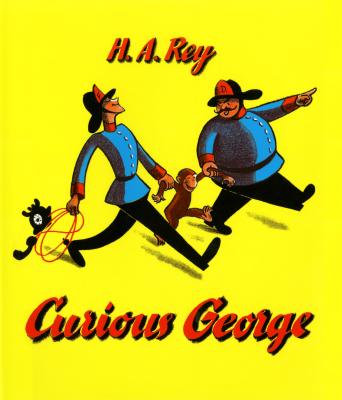 By H. A. Rey, Margret Rey
Call or email to see if a used copy is available.
Out of Print

In this, the original book about the curious monkey, George is taken from the jungle by the man in the yellow hat to live in a new home, but--oh, what happened! Though trying to be good, George is still very curious and takes a swim in the ocean, escapes from jail, and goes for a flying ride on a bunch of balloons. This treasured classic is where it all began for the curious, loveable monkey and is a must have for any children's book collection.

H. A. Rey (1898–1977) was born in Hamburg, Germany, near the world-famous Hagenbeck Zoo, and developed a lifelong love for animals and drawing. He and his wife, Margret (1906–1996), who studied art at the acclaimed Bauhaus school, had many pets—including two marmoset monkeys that joined them on one of their steamship journeys across the Atlantic. Hans and Margret’s world-famous curious monkey first appeared in a manuscript strapped to their bicycles as they fled wartime Paris for the safety of the United States. Committed philanthropists in their own lives, a portion of proceeds from each Curious George book sold flows to the Curious George Foundation, which funds programs for children that encourage inquisitiveness in learning and exploring. Curious George has been successfully adapted into a major motion picture and an Emmy-winning television show on PBS.www.curiousgeorge.com.

"Small children will wear the book out with affection." Horn Book