Black Death at the Golden Gate: The Race to Save America from the Bubonic Plague (Paperback) 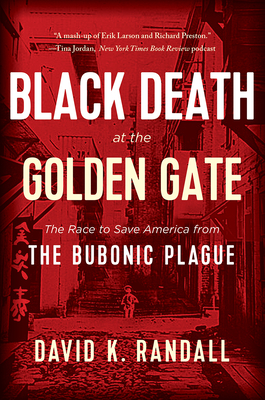 By David K. Randall
$17.95
Click Title for IN STOCK Location

Squalid San Francisco, still a wild west town in the early 1900s, was ill-prepared to face a deadly threat: the Bubonic Plague. Politicians, the press, and much of the public stigmatized the Chinese victims, while denying the plague's presence, leaving a small band of doctors the last line of defense against rampant death. — Mike Hare

On March 6, 1900, the bubonic plague took its first victim on American soil: Chinese immigrant Wong Chut King. Empowered by racist pseudoscience, officials rushed to quarantine Chinatown—but when corrupt politicians mounted a cover-up to obscure the threat, it fell to federal health officer Rupert Blue to save San Francisco, and the nation, from a gruesome fate. Black Death at the Golden Gate is a spine-chilling saga of virulent racism, human folly, and the ultimate triumph of scientific progress.

David K. Randall is a senior reporter at Reuters. The New York Times best-selling author of Black Death at the Golden Gate, Dreamland, and The King and Queen of Malibu, he lives in Montclair, New Jersey.

A vivid, fast-paced and at times revolting history of the plague in San Francisco.… [Black Death at the Golden Gate] unfolds like a medical thriller.

The race to identify, isolate and halt the disease is set against a rich background of official complacency, financial malfeasance, political intrigues and scientific disputes.… Randall’s account is pacy and gripping.
— Tilli Tansey

A haunting detective tale packed with villains and heroes.
— Jason Fagone, author of the national bestseller The Woman Who Smashed Codes

Black Death at the Golden Gate provides a fascinating glimpse into [a] forgotten chapter of American history.… Discrimination, bigotry, and greed are woven throughout this fast-paced, historical, non-fiction adventure.… This is a great read for anyone who enjoys history or medicine.

A fascinating, in-depth look at a little-known episode in American history.… The story of the bubonic plague outbreak serves as an excellent lead-in for Randall to examine the advances that created modern cities.

This story of an epidemic that wasn’t is a gripping historical mystery and a key cautionary tale for our own time.

A complex tale of medicine, politics, race, and public health.… [Randall] does good work in revealing the clamorous clash of public and private interests surrounding the outbreak.… A tale that resonates with the outbreak of measles, mumps, and other supposedly contained epidemics today.

David K. Randall is a spellbinding writer. He has turned a critical chapter of medical history into a riveting tale that reads like a detective novel, chock-full of scandals and intrigue.… Read Black Death at the Golden Gate because it’s a page-turner, but more important, read this book because the issues Randall spotlights resonate today.