Freedom National: The Destruction of Slavery in the United States, 1861-1865 (Paperback) 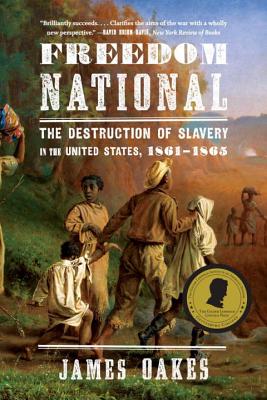 Clearly, relentlessly, and convincingly destroys the idea that Lincoln and his anti-slavery Republicans waited until dire military necessity led them to act against slavery. James Oakes shows that the process was gathering steam even before Lincoln took office. Perfect book to enhance your viewing experience of Spielberg's Lincoln. Compelling. — Bill Lewis

Winner of the Lincoln Prize

"Oakes brilliantly succeeds in [clarifying] the aims of the war with a wholly new perspective." —David Brion Davis, New York Review of Books

Freedom National is a groundbreaking history of emancipation that joins the political initiatives of Lincoln and the Republicans in Congress with the courageous actions of Union soldiers and runaway slaves in the South. It shatters the widespread conviction that the Civil War was first and foremost a war to restore the Union and only gradually, when it became a military necessity, a war to end slavery. These two aims—"Liberty and Union, one and inseparable"—were intertwined in Republican policy from the very start of the war.

By summer 1861 the federal government invoked military authority to begin freeing slaves, immediately and without slaveholder compensation, as they fled to Union lines in the disloyal South. In the loyal Border States the Republicans tried coaxing officials into gradual abolition with promises of compensation and the colonization abroad of freed blacks. James Oakes shows that Lincoln’s landmark 1863 proclamation marked neither the beginning nor the end of emancipation: it triggered a more aggressive phase of military emancipation, sending Union soldiers onto plantations to entice slaves away and enlist the men in the army. But slavery proved deeply entrenched, with slaveholders determined to re-enslave freedmen left behind the shifting Union lines. Lincoln feared that the war could end in Union victory with slavery still intact. The Thirteenth Amendment that so succinctly abolished slavery was no formality: it was the final act in a saga of immense war, social upheaval, and determined political leadership.

Fresh and compelling, this magisterial history offers a new understanding of the death of slavery and the rebirth of a nation.

In this brilliant new look at the destruction of slavery during the American Civil War, Oakes reveals how the U.S. abolitionist movement relied not only on high-minded moral suasion but also on the small-bore legalistic strategy of the Republican Party.
— Walter Russell Mead - Foreign Affairs

Oakes argues that Lincoln, from the moment of his inauguration, began using every political and military means at his disposal to wipe out slavery forever.
— Howell Raines - Washington Post

This remarkable book offers the best account ever written of the complex historical process known as emancipation. The story is dramatic and compelling, and no one interested in the American Civil War or the fate of slavery can afford to ignore it.
— Eric Foner, author of The Fiery Trial: Abraham Lincoln and American Slavery

Freedom National provides the best account we have of the process of emancipation and the ultimate abolition of slavery, on the ground in the South and in the halls of power at Washington. It also makes clear that from the beginning, nearly all participants recognized that the central issue of the war was slavery and that its likely outcome was a new birth of freedom.

Brilliant in analysis and compelling in argument, this is now the book to read on how slavery died.
— Library Journal

A masterful piece of scholarship…A must-read book for anyone seeking a greater understanding of the complicated and politically charged nature of emancipation.
— Robert I. Girardi - Washington Independent Review of Books

An absorbing look at the complex process of emancipation and the forces behind the incentives and threats—and the war—that eventually led to the end of slavery in the U.S.
— Booklist